A soldier will be dismissed from the army after supplying fellow soldiers with a psychoactive drug which left some bashing their heads until they bled. 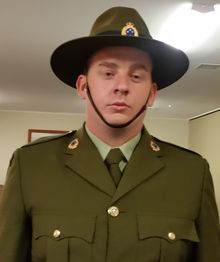 Private Luke Brame, 22, had pleaded guilty to charges of supplying and offering to supply a psychoactive substance and doing an act likely to prejudice service discipline.

Judge Anne Gaskell accepted his plea after a court martial at Linton Military Camp today and ordered him to be kept in a detention centre for 90 days. Following that the apprentice mechanic will be dismissed from service.

The prosecution told the court Private Brame attended a party with seven other soldiers before going to Palmerston North's The Daily nightclub last October.

The group met with a drug supplier who gave them the synthetic drug commonly known as "N-Bomb".

The prosecution said the group's behaviour became so erratic and violent, the men, except Private Brame, were restrained by police; two hit their heads against the cell walls until they bled.

All the men were hallucinating and Private Brame had no recollection of what had occurred.

The prosecution said Private Brame lacked integrity and the courage to exercise self-control, and his behaviour had eroded morale in his unit.

In his defence, lawyer Amy Whittaker said the drug dealer was the supplier and that Private Brame's culpability was therefore low-level.

She said Private Brame made "one big mistake" but he was remorseful and felt terrible that some of his friends who took the drugs continued to have health problems.

Ms Whittaker said Private Brame had been affected by stress and frustration caused by dyslexia.

She said he had been seeing a counsellor, was working to address alcohol issues and had cooperated with police.

In her submission on sentencing, Ms Whittaker said the loss of his career alone would be a significant penalty, and no period of detention was warranted.

But Judge Gaskell said Private Brame was the author of his own misfortune, and that his performance as a solider had been below average and went against the defence force's principles.

She said the fact he was in the military, and those he supplied the drugs to were as well, was an aggravating factor and had led to five other soldiers being discharged.