Hollywood moviemaker Quentin Tarantino - who is in New Zealand to promote his latest film - is sticking to his plan of only making 10 films.

The writer and director is known for cult films Kill Bill and Pulp Fiction and travelled to New Zealand for last night's premiere of his latest movie, The Hateful Eight, which is in cinemas now.

He said he worked at a "very high concentrated level" and did not think he could do that for more than 10 movies.

Tarantino said he wanted to create a filmography, rather than a career.

"It's all about the films, it's not about me having a job.

"I'm lucky enough to live the life of an artist in a profession that it's very hard to do that." 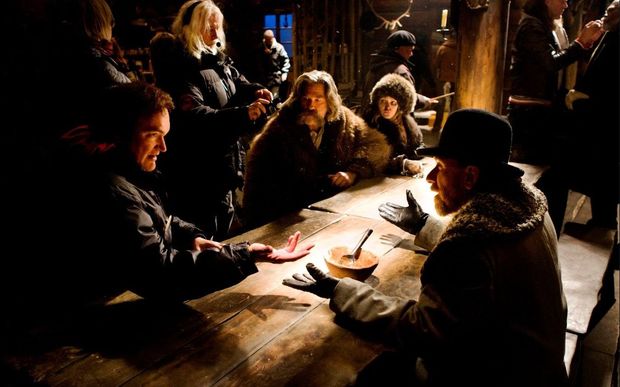 Director Quentin Tarantino (left) works with his cast on the set of The Hateful Eight Photo: Supplied

That was a big deal, he said.

The American also said he was a "big fan" of New Zealand cinema.

Tarantino described the 1983 film Utu as "hands down the best New Zealand movie of all time".

He said he was a fan of filmmakers Roger Donaldson and Bruno Lawrence.

Tarantino was at the Auckland premiere of The Hateful Eight last night.

New Zealand stunt woman Zoe Bell has appeared in many of his films.