Some businesses selling goods on Trade Me are considering hiking their prices as the site's new fees don't eat into their bottom line. 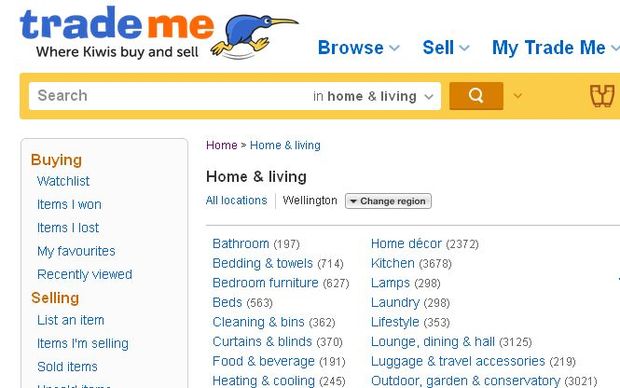 At the moment, Trade Me charges success fees on general items at five different rates, and gives users one free photo per auction.

Kim Booth runs The Best Furniture Shop in Christchurch, and is a registered trader on the site.

Ms Booth said most of her items sell for more than $200.

"Trade Me was just another little advertising avenue I was using, now it's becoming quite expensive should I sell high-priced items," she said.

Trade Me said it was talking to traders who would be most affected, and would offer them a deal.

Ms Booth said she had been offered a free feature and no high volume listing fees on all her general items listings for three months.

She said that was not enough and she would have to reconsider how much she sells online, or increase prices.

Other furniture traders RNZ News spoke to said the increased fees would have to be passed on.

Furniture Point's Rajiv Abrol said most of his items sell for between $600 and $800, and the marketplace was too competitive for him to raise his prices.

"Trade Me is another tool for marketing, [but] Trade Me wants to grab all the money so I'll have to find other ways to get to the customers."

Trade Me's head of marketplace Stuart McLean said the change would be good for most sellers.

"What we're trying to do with this is listen to our customers, simplify pricing, make the user experience better and we think that will create a better marketplace and more activity," he said.

Punakaiki Fund director Lance Wiggs, who advised on the sale of the site to Fairfax, said Trade Me would make a lot more money out of items that sell for more than $200.

"Overall they'll lose a bit and gain a bit, I think they'll probably gain $2 million to $5 million to even $10 million positive," he said.

Mr Wiggs said he was sure Trade Me would keep a close eye on how the pricing changes affected those sellers at the top end, to make sure it was not putting anyone out of business.