Eden Park's decision to remove seven cricket fans from the ground has drawn social media criticism - but police say it had nothing to do with the drums they were playing. 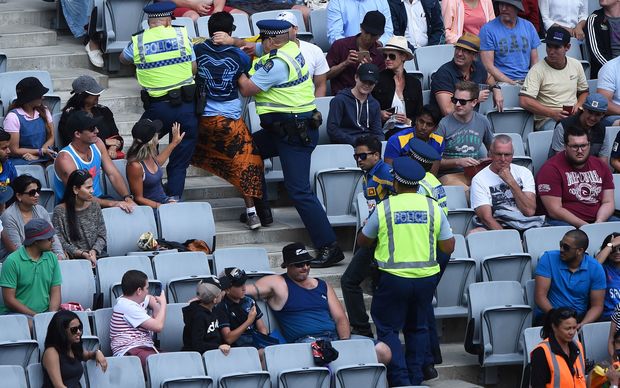 Police take away fans during the Twenty20 match between the Black Caps and Sri Lanka at Eden Park. Photo: PHOTOSPORT

Some spectators at yesterday's T20 International cricket match between Sri Lanka and New Zealand say they were disappointed when seven people were escorted from the game, apparently for playing the drums.

Jamie Wall said he sat near the Sri Lankans to share in their enthusiasm.

"We were sitting about a few rows back from the Sri Lankans supporters, they all congregate together on the terrace," he said.

"We knew they'd be a lot of fun to sit near because they're always singing and chanting."

But Mr Wall said the security guards did not enjoy the sideshow, and were soon confiscating the drums.

"They started throwing out the people who were beating the drums, because they were kind of objecting to them getting taken off them," he said.

"And they [security] were getting pretty heavy-handed about it, no one was getting quite violent but a couple of guys were getting headlocked and carried out."

On social media, fans called the security guards buzzkills, and said the tactics were embarrassing, heavy-handed and unnecessary.

John Holley said the Sri Lankans did not appear to be a problem at all.

"They were just a very fun group, it added to the colour of the day," Mr Holley said.

Taking away the drums, and evicting the people 'inflamed' the situation, he said.

"Well obviously security came in and the guys got upset, then the police get in and it just keeps ratcheting up.

"That's the whole thing, from what seemed at the time to be no reason to take the drums away.

"It created an incident where no incident needed to occur at all."

Some fans thought perhaps Eden Park had a rule against instruments, but that was not in the Stadium's conditions of entry.

Eden Park Trust Board chief executive Guy Ngata declined an interview, saying he did not have all the information to hand, and that he would be receiving reports on the matter this morning.

But the police said there was more to the story than could be heard on social media.

Senior Sergeant Danny Meade said the fans were removed from the grounds because they were intoxicated, were blocking exits by sitting in aisles and stairways, and would not comply with the security guards' requests.

Mr Meade said none of his officers had mentioned anything about anyone playing drums.

He said no one was arrested or charged.