Members of Auckland's Shi'ite Muslim community are calling on the Government to cut ties with Saudi Arabia, in view of the execution of a popular cleric. 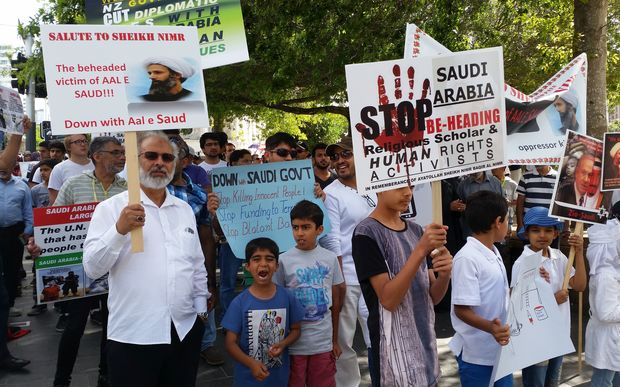 Sheikh Nimr Al-Nimr was recently sentenced to death after being arrested in 2011 during mass anti-government protests by Saudi Arabia's Shi'ite minority.

The Islamic Council of New Zealand held a rally in Auckland yesterday, marching on the Saudi consulate to decry the execution.

The group said Sheikh Al-Nimr was killed for speaking up for minority rights.

Lucy Shah-Mohamady, who identified as a Maori Muslim, said New Zealand should not affiliate itself with the Saudi regime.

"There is no democracy there, why are we affiliating and have such close ties with them? Are we just going to turn a blind eye, are we going to silence ourselves?"

The Government has said it did not agree with the killing but would not say whether it would affect trade negotiations.

Auckland Shi'ite leader Mohamed Al-Modarresi said his family was close to the cleric, who had studied under his father.

"He came to our house, he was a student of my father's. My family is pretty broken up, they are speechless now, they didn't even expect those tyrants of Saudi Arabia to be this crazy."

Mohamed Al-Modarresi said Saudi Arabia needed to be held to account for its human rights violations.

His death has led to the cutting of diplomatic ties between Saudi Arabia and mainly Shi'ite Iran, and has heightened tensions in the Gulf.