The New Zealand sharemarket has escaped the first trading day of the year with only modest losses after a slump in Chinese stocks weakened the New Year share prices across Asia, Europe and America. 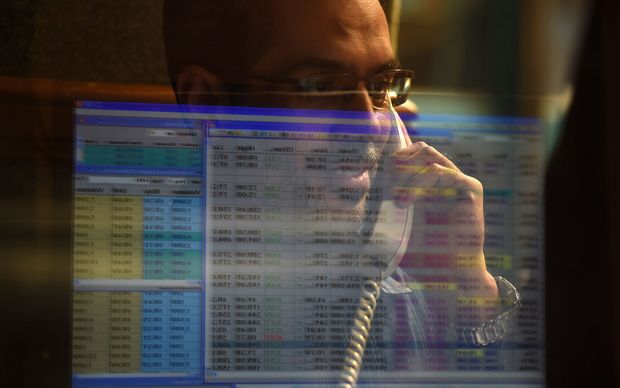 At one stage the index fell more than 1.2 percent, with many of the leading stocks losing as much as two percent, before the market settled.

The fall followed a rout on global share markets, with American and most European markets falling as much as 4 percent, which was triggered by renewed fears about the health of the Chinese economy.

However, investor nerves have been calmed by steady Asian markets, including Chinese stocks, which have been fractionally higher today.

The move in the New Zealand market was exaggerated by lower than average numbers of shares being traded, and some profit taking after the market's record breaking run last year.

Among the bigger New Zealand losers were Fisher and Paykel Healthcare and Meridian Energy, which both fell 3.8 percent, and software company Xero, which closed 5.6 percent lower.

Stocks fell more than 2 percent in early trade, prompting fears that exchanges were set for a second day of panic selling after a 7 percent dive yesterday set off a new "circuit breaker" mechanism, suspending trade nation-wide.

But stocks soon moved back into positive territory thanks to a mixture of policy intervention and hard cash.

The CSI300 index was up 0.8 percent while the Shanghai Composite Index gained 0.4 percent.

Signs of steadying in mainland markets also soothed jangled nerves in Hong Kong, where the Hang Seng index was little changed after a 2.7 percent drop yesterday. 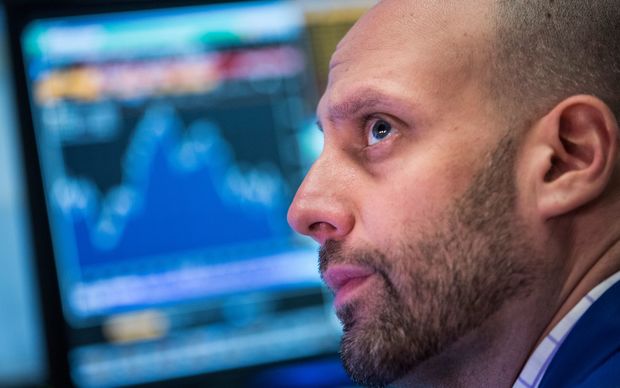 A trader works on the floor of the New York Stock Exchange. Photo: AFP

On Wall Street, all 10 major S&P sectors were lower, led by the 2.4 percent fall in the technology sector. Bank stocks were also hard hit, with Goldman Sachs down 3.2 percent.

"Those are violent New Year fireworks, Janlyn Capital managing director Andre Bakhos said. "That's quite a way to start the day off." 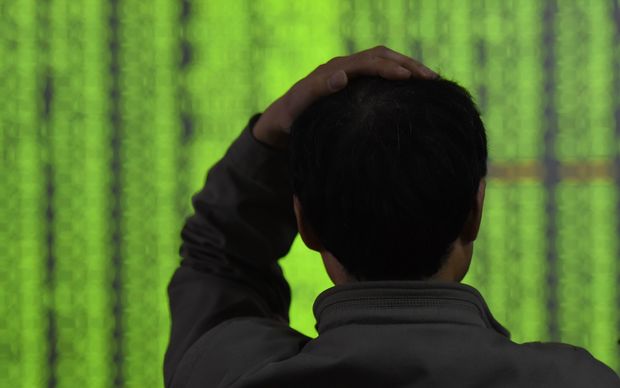 A Chinese investor looks at prices of shares (green for price falling) at a stock brokerage house in Hangzhou city. Photo: AFP

Earlier on Monday, trading on China's Shanghai and Shenzhen stock exchanges was halted for the first time under new "circuit breaker" rules, which are designed to curb market volatility.

The share price falls came after more signs of trouble in the world's second-largest economy.

The Caixin/Markit purchasing managers' index slipped to 48.2 in December, marking the 10th consecutive month of shrinking factory activity in the sector. A reading below 50 indicated contraction.

Some analysts also attributed the decline in share prices to the imminent end of a six-month lockup period on share sales by major institutional investors, a policy implemented to shore up indexes. Big shareholders may start dumping shares once the ban is lifted on Friday.

Huang Cengdong, an analyst for Sinolink Securities in Shanghai, said: "The market will not improve because there will be heavy selling in the near future."

"Welcome to 2016, though you'd be forgiven for thinking the markets were back in August 2015 with China causing some early New Year issues," said Spreadex analyst Connor Campbell.

And Alastair McCaig, market analyst at IG, said: "Anyone hitting the trading floor expecting a calm and quiet start to 2016 was given a rude surprise as Asian chaos affected European markets."

Markets were also rattled by growing tensions between Middle East powerhouses Saudi Arabia and Iran over the execution of Shia cleric Nimr al-Nimr.

The execution in Saudi Arabia led to protests in Tehran. Saudi has cut diplomatic ties with Iran and given diplomats 48 hours to leave.

Iran's supreme leader has warned Saudi Arabia it would face "quick consequences" for the execution.