Simon Kerr was once one of New Zealand's most notorious career criminals. 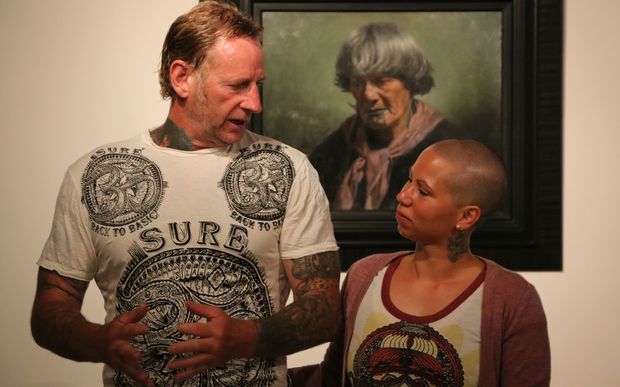 In the '90s, he was the leader of a group of safe-crackers known as the Hole-in-the-Wall Gang, and staged a number of escapes from prison.

But during his most recent prison sentence, served at Northland's Ngawha Prison, he began working out his troubled life through art.

What was therapy for him was quickly recognised as something much more by his astonished art tutors, and the powerful works he painted in prison have formed the exhibition currently showing at the Whangarei Art Museum: The Roads To Redemption.

It's hard to imagine the artist as a modern-day Ned Kelly - his one-time hero. The rangy 53-year old is friendly, well-spoken, and apparently bemused by the praise being heaped upon him by gallery patrons at the exhibition opening.

He maintains he's not an artist, that he's just telling his story - trying to make sense of it all. But he's not about to stop painting.

The former inmate, flamboyant ripper-out of ATMs and serial prison escaper, has discovered in middle age what he was actually meant to do with his life.

The works in The Roads To Redemption record seminal episodes in his chaotic history, from lost boy to career criminal and now family man.

The works are confronting - alive with pain, yet somehow detached as if the artist were documenting a dream.

Some move gallery patrons to surreptitious tears, such as My First Escape, showing two small boys running away from foster care, legging it through the Auckland night in the hope of finding their mother.

"My father used to say, 'Your mother's gone mad', he said. "So I had this thing that she was in a mental hospital. And I knew that on Stanley Point Rd there was a big hospital. My brother told me he knew where my mother was, so we could go and find her."

Kerr, aged four, and his slightly older brother found an old pram. The older boy pushed the younger all the way to a tunnel at North Head and they hid for the night.

In the early hours of the morning, the escapees set off again down Stanley Bay Rd, where their irate father finally caught up with them and returned them to their carer. 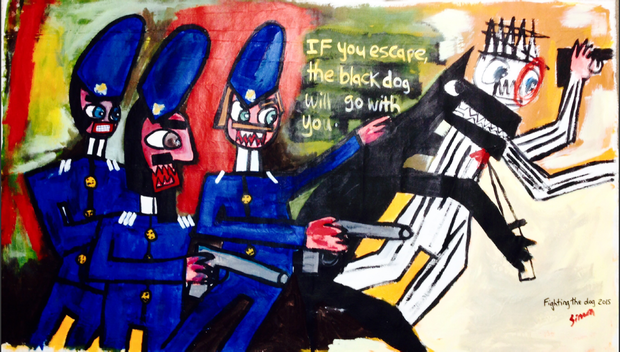 Other paintings by Kerr evoke horror. One shows a prisoner who has just torn out his own eye - to force prison guards to take him away from the bullies tormenting him.

Another shows a prisoner who has plunged scissors into his head.

The year was 1982 and the place was the security block at Mt Eden. Kerr was barely out of his teens.

He said the law was changed after the eyeball incident. The man concerned had been imprisoned for non-payment of fines, and Kerr said he mutilated himself to force the guards to remove him from the wing and other prisoners who were tormenting him.

"He had limited intelligence and it was his answer to escape the bullies. So I saw him get dragged away and I saw other men walk into his cell and they came out with all his rations. His sugar and butter and milk. And, I'll always remember, I was only young, and this sort of hard-looking guy approached these men and I thought, 'Oh great, some sort of compassion', but he just wanted the sugar. And that was jail, really. "

Kerr has spent half his life behind bars. He was first sent to prison for minor offences when he was 15, and there he met a friendly old safe-cracker, who taught him all he knew.

Kerr's sister Ruth Kerr said her youngest brother was cast adrift when his parents split: the girls went to their grandparents, the boys went with their mentally unwell mother - and then to foster homes. For years, the siblings never saw one another.

The parents, she said, were out of their depth. The father, a newspaper photographer, met their mother when she was 18. By the time she was 25, she had four children and a husband who was hardly home, and her fragile mental health was in tatters.

Kerr was the only one of the fractured family who turned to crime. In one painting, he said that was because he was weak and the others were strong.

Ms Kerr sees it differently. "Simon was a very creative child; he was quite a different child," she says.

"I remember him when he was four, trying to fly off the back stairs and breaking his legs. There was something missing there - that risk-averse thing. And he was the youngest child [in] a very unstable situation. In some ways he bore the brunt of it. And you see the effect of that. "

It was in art classes at Ngawha Prison that Kerr's gift for painting was discovered.

One of his tutors, Kerikeri artist and critic Mike Nettman, said he was staggered when he first saw what Kerr was producing.

"I looked over his shoulder to see what he was doing and I thought, 'My gosh, this man is incredibly talented.

"I asked him what he did before he was in prison. And he said to me, 'I robbed banks'. I said I meant what was his occupation and again he said he'd robbed banks. From 15 years old, he'd been robbing banks and that's all he knew. And his life he'd paralleled to Ned Kelly's."

Mr Nettman said it was not surprising that some of the paintings moved gallery goers to tears.

"It's very emotional. You know, it's very honest work. He doesn't want to learn about technique and he doesn't have to, because he is a storyteller in his art and it is very powerful stuff. Also because of the words he puts in his paintings. And he's there on the canvas as most artists are. He's opened his soul."

Mr Nettmen believes Kerr could become one of New Zealand's greatest artists - though, as he said, he is biased.

Mrs Langston, meanwhile, does not believe her brother will reoffend.

She said he had finally done the painful work he needed to do to confront his life and, as the exhibition title suggests, redeem it.

'I have love in my life now'

Kerr said he was just glad that people liked his work.

"I'm humbled by that. I don't see myself as an artist; I'm just telling my story."

And he was not angry that no-one recognised his plight as a youngster and helped him.

"I'm not angry with anyone except maybe myself.

"And I don't see it as a 'plight'. It's just the way it is; life is an experience and if we all lived the same and had the same experience - how boring. Hopefully something good will come of it."

He will keep painting. There are many more stories to tell.

"I have love in my life now; I'm committed to that, And I want to paint about that."

Kerr's now living on parole with his partner Ella and two young children, in Kerikeri - just down the road from the police station.

Every painting in The Roads to Redemption has sold but the works are on show at the Whangarei Art Museum until the end of January.