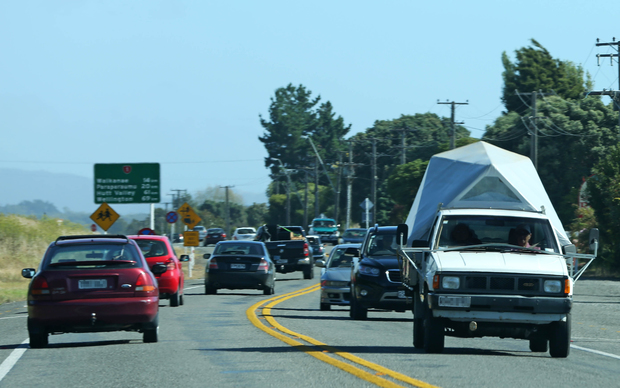 Traffic has been heavy through-out the day and there have been long delays north and south out of Auckland and north out of Wellington.

In Auckland the Northern Motorway is heavy through Puhoi and Warkworth, then congested around Wellsford.

Further south, in Wellington, State Highway One is moderate northbound on the Coast Rd but heavy from Paraparaumu to Waikanae and congested to Otaki.

A spokesperson said it was also busy on State Highways 2 and 25, between Bombay and Kopu, on the way to the Coromandel.

Very congested on SH1 between Plimmerton and Paekakariki. Expect delays on Coast Rd. Consider travelling later in the day. ^LC

Ten people were injured in a three-car crash at the intersection of SH28 and SH5 at Tapapa, in South Waikato, with one in a serious condition. Police said the scene had been examined and the road was open again.

State Highway One, near Towai north of Whangarei, had been re-opened after it closed for a time because of a serious crash.

The Transport Agency said delays could still be expected.

St John said one person was taken by helicopter to hospital with life-threatening injuries.

AA spokesperson Dylan Thompson said drivers needed to be patient, with this holiday season shaping up to be one of the busiest yet on the roads.

"There's no point in trying to pass and overtake, you know, and taking silly chances on the roads, because you're just going to have more traffic up ahead.

"Even if you've got a vehicle going a little bit slower than you in front, the best thing is keep a good following distance, keep relaxed and just wait for a safe opportunity to pass."

Slower drivers should also pull over when they could to let others pass, Mr Thompson said.

The police have also urged drivers to be patient, with three deaths on the road in the holiday period so far.

There had been more than 200 crashes since the holiday period began on Christmas Eve and many of them could have been avoided, he said.

One person died on Christmas Day in a crash near Whangarei, while two people were killed in a head-on crash south of Tokoroa yesterday.