With more than 200 crashes and three fatalities in the Christmas holiday period, police say drivers need to be more cautious and patient. 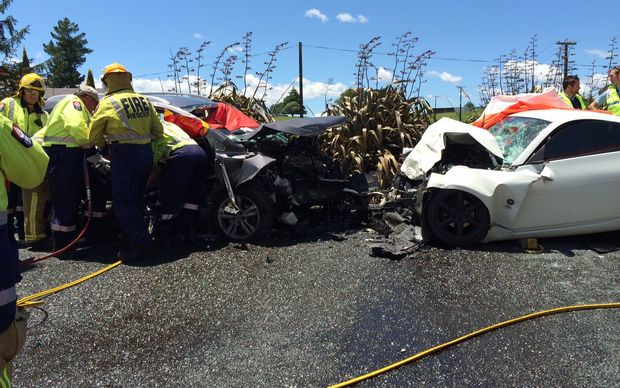 The scene of the fatal crash at Tokoroa Photo: Trustpower TECT Rescue helicopter

Two people have died and three are seriously injured after a head on crash south of Tokoroa this afternoon, bringing the Christmas road toll to three.

Emergency services were called out at midday after the collision on State Highway One near the Tokoroa golfcourse.

The crash closed the State Highway south of Tokoroa near Kinleith as police examine the scene.

The three survivors have been taken to hospital in serious condition.

National road policing manager Steve Greally said there had been too many crashes since the holiday period started on Christmas Eve and that the road toll was well up on last year.

"We're around about 30 more than this time last year, so that's quite horrific in its own right. These things can change very quickly - around three weeks ago we were 17 more and all of a sudden it's blown up to around 30, 32, so it's really, really disappointing.

"People's driving behaviour has not been safe. Some families have already had their Christmas holiday ruined by these tragedies.

"We've had over 200 crashes throughout New Zealand since our holiday period began. Many of these have been minor incidents like nose-to-tails where police don't attend, but a few have been serious crashes and obviously these latest ones have been deadly."

Mr Greally said many of these crashes could have been avoided had people kept their wits about them and had driven with care and caution.

"People need to drive to the conditions of the road and be patient. There's a lot of traffic on the roads over this time, and we all just need to take more care," he said.

Yesterday, one person died and three others were injured in a three-car crash near Whangarei at 6.45pm.

Meanwhile, the police are warning people to be patient if they're heading to Boxing Day sales, after multiple crashes near a large shopping mall in Hamilton.

They say there have so far been three crashes, including a seven-car pile-up, in heavy traffic on Wairere Drive near The Base Te Awa.

The police say no one has been injured in any of the crashes, but they are asking drivers to be patient and avoid distractions.