ANALYSIS - The government is moving to close one of nine charter schools set up to tackle the underachievement of Māori and Pasifika children.

The charter school about a week before it opened in February 2014. Photo: RNZ / Lois Williams

It has given the owners of Te Pumanawa o te Wairua until mid-January to respond to its proposal to close the school in March.

Te Pumanawa o te Wairua is a charter school at Whangaruru in Northland. It opened in 2014 as Te Kura Hourua ki Whangaruru but later changed its name.

The school aimed to provide a curriculum focused on farming and marine skills for local children.

The school had 36 students this year.

It is owned by Nga Parirau Matauranga Charitable Trust.

There were warning signs about the school right from the start.

During the application process, the Ministry of Education warned that the trust behind the school needed more time to develop its plan but the government approved it anyway.

The school soon ran into problems with student behaviour and the Education Review Office (ERO) identified failings in management and governance.

At the start of 2015, the ministry told the government that leadership was the school's most significant issue and it needed to quickly replace its leadership team with experienced staff.

It later recommended the school be shut down and said that could happen by May.

But, when Education Minister Hekia Parata asked what was in the best interests of the children, the ministry recommended keeping the school open for the remainder of the year as some students were likely to drop out of education altogether if the school closed.

An audit in October found the school had improved its governance, management and finances, but student achievement had improved only a little and only for some students.

Ms Parta said that wasn't good enough and has proposed closing the school on 7 March. The trust that runs the school has until mid-January to respond.

How much money has the government spent on the school?

The government has spent $4.8 million on Te Pumanawa o te Wairua. That includes a set-up payment of $1.38m, which the school used to purchase farmland and buildings.

For Te Pumanawa o te Wairua, the quarterly grant this year was $412,147 including $103,071 per quarter for property and insurance.

What happens to the school's assets if it closes?

That is not clear and it has been the focus of a lot of criticism.

The school's contract and later revisions of the contract do not appear to make any provision for returning assets to the government if it should close.

However, a letter from Ms Parata to Nga Parirau Matauranga Charitable Trust says the trust had agreed to sell the school's assets in order to reimburse the Crown if the school is shut down.

Ms Parata has said publicly the future of the assets will now be the subject of negotiation.

What is a charter school?

The government calls the schools "partnership schools" or "kura hourua" but they are based on a US model known as a "charter school". RNZ uses that term because it is widely recognised and the government used it while developing its version of the model.

Essentially, charter schools allow the government to contract third parties to provide schooling. (In fact, "contract school" might be a better name for the schools as, somewhat confusingly, regular state schools have charters.)

The schools are free from many of the rules and regulations that govern regular state schools such as how many teachers and other staff to employ and how much to pay them, and they are not governed by a board of elected trustees from the parent community. 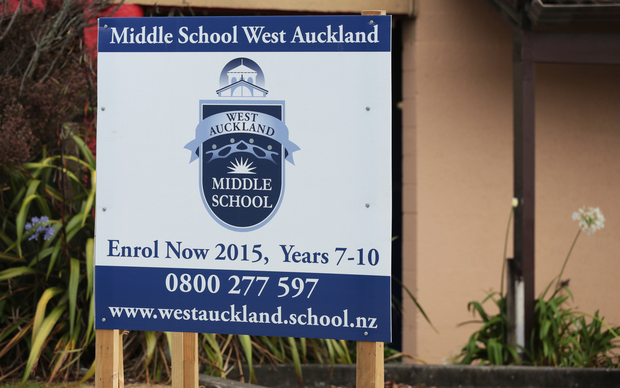 The first five New Zealand schools opened in 2014, followed by a further four at the start of 2015.

The government has called for applications for a third round of schools to open in 2017.

Why is there so much opposition to the schools?

Some people say the schools are a neoliberal policy designed to undermine teacher unions and turn the public education system into a profit-making venture.

In New Zealand, the schools are very small, which means their funding on a per-student basis has been high relative to larger schools.

The government says its version of the schools will avoid the pitfalls and provide the benefits of the model.

It wants the school to find better ways of improving education from priority groups - Māori, Pasifika and children from poor families.

How are the other eight charter schools going?

Official reports on the remaining charter schools have been positive.

However, the four schools set up this year have struggled to meet the guaranteed minimum level of enrolments for which they are being funded.

In addition, one of them, Middle School West Auckland had complaints from dissatisfied parents and its starting principal resigned just two weeks into the job after it emerged he was the subject of a complaint to the Education Council.

A government-funded evaluation of three of the first five schools said their governance, management and use of funding was innovative and there were early signs the schools were developing innovative education.

But the government has ruled out a direct comparison of the schools' academic results with those of regular state schools.