The Church of the Flying Spaghetti Monster has been approved to conduct marriages in New Zealand.

The church's adherents, who describe themselves as Pastafarians, believe in an airborne god - perhaps from spaghetti and meatballs - wear colanders on their heads and practise a gentle form of piracy. 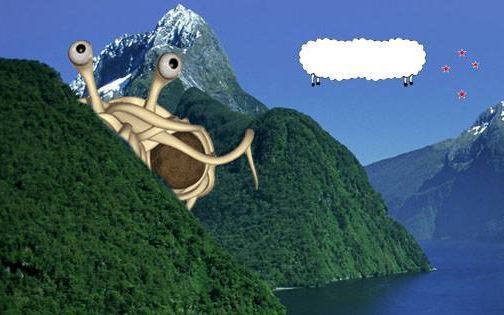 The chief office bearer, or Top Ramen, said this was just the first step; they now need to to nominate marriage celebrants for approval before they can start conducting weddings.

According to the Ramen, who, for earthly reasons wishes to remain anonymous, the church has thousands of followers, although membership is not yet recognised yet in the census.

"We are a bona fide church, and our people do like to get married, some of them several times," she told Morning Report.

"We like to have baptisms and babies and celebrations and divorces, and its always nice to have official marriage celebrants to preside over these celebrations.

"Churches are all about communities and celebrations." 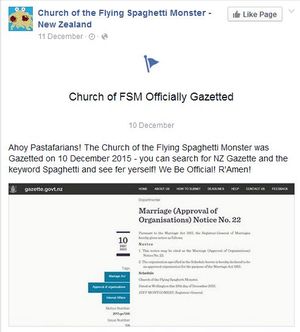 So what would a Pastafarian wedding look like? The Ramen said while colanders are traditional headgear, it was also appropriate to wear pirate gear.

"The first people that the Flying Spaghetti Monster created were pirates. They've had a bad rap and a bad name and a lot of bad people use that title now, but originally pirates were good. We can wear the pirate gear, we can wear the pasta gear, we're quite flexible."

She said Pastafarians were "decidated to increasing the happiness, maximising the well-being of all sentient beings".

Jeff Montgomery, Registrar-General of Births, Deaths and Marriages, who approved the church to conduct marriages said the case was "one of the more unusual ones." 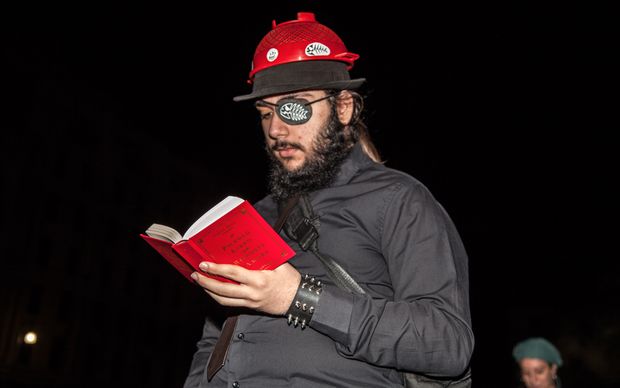 An adherant of the Church of the Flying Spaghetti Monster in Italy. The self-proclaimed religion is pro-individual rights and its members often dress as pirates during demonstrations. Photo: AFP / Citizenside / Antonio Melita

The decision did not grant any particular status to the Church, other than being able to later nominate marriage celebrants for his considersation.

"There are many, many religious and philosophical organisations in New Zealand and I approve each one of them. This was a little unusual."

The Church of the Flying Spaghetti Monster started in the mid-2000s as a protest against the teaching of intelligent design in schools in the United States.

However the Ramen said it was more than just a satirical or protest movement.

"We're for those people who perhaps want a community but their beliefs don't fall in line with any of those other religions. And our religion is far more humorous. We do not try to take ourselves or any other religion too seriously. We do believe that religion and science can be combined."

The RNZ audience were also not taking the religion too seriously this morning. One posed the question, "Is the leader of the Spag Bol Monster church known as a Pasta?" while another asked, "These new celebrants, are they pastas or ministeronis?"