Transpower is warning of a risk to the electricity supply in a cold dry winter once Genesis Energy shuts its coal burning power plants at Huntly. 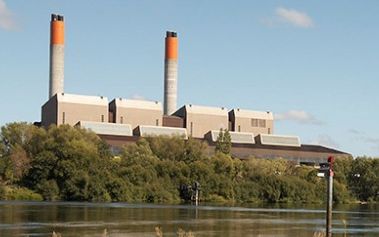 Genesis annnounced some months ago that the plants would close in 2018, citing economic and environmental considerations. Contact Energy and Mighty River Power are shutting similar power plants.

Transpower said this could create difficulties if dry weather starved hydro dams of adequate water supplies during a cold winter. This problem occurred several times in the early 2000s.

As well as running the national grid, Transpower has the practical task of making sure that adequate power with adequate voltage runs through the nation's wires at all times.

In the second of two reports, Transpower said the security of supply in 2019 was highly uncertain. The dry winter risk would still be very high even if 100 Megawatts of new electricity generation were installed after the Huntly plants shut down. If 350 Megawatts were set up, the risk would slip from very high to high, and it would be moderate if 600 megawatts were installed.

Under all these scenarios, the risk would be low if the aluminium plant at Tiwai point in Southland closed down, which is a possibility the plant's management have reserved as an option.

The scenarios assume that electricity demand will rise by 1.38 percent a year

Transpower qualified its forecasts by saying it did not think there would be an extended shortage of electricity supply, and the electricity market would provide investment signals in advance that that new plant was needed.

Last month the Electricity Authority said consumers would not be left short of power coal and gas fired plants are shut down.

Chief executive Carl Hansen said the industry would work it out as it did during a significantly dry period in 2011.

"What we're seeing from the industry themselves, in the way they're pricing the contracts for 2019, they're essentially saying this will be sorted by the industry."

"Consumers can be assured there's nothing to be concerned about, it's just the industry debating through how they should meet the circumstances as they come up to it."