A soldier who died trying to save his commanding officer in a firefight in Afghanistan has been recognised for his bravery. 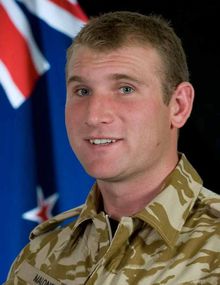 He was part of a New Zealand provincial reconstruction team that was ambushed by insurgents in 2012.

After helping drag his injured company commander to safety, Lance Corporal Malone was fatally shot in the chest.

Six of his army colleagues have received gallantry or distinguished service awards for their service in Afghanistan, including two who were also involved in that firefight, Sergeant David Duncan and Lance Corporal John Luamanu.

Major Geoffrey Faraday, who served with the UN Mission in South Sudan, has been awarded the Gallantry Star - the second-highest such honour.