What is this COP21 of which you speak?

In this dystopian future, law and order was left to 20 artificially intelligent automaton police officers.

Today, all 20 are vanquished, destroyed by bloodthirsty anarchist militias. But wait. Suddenly, through the dust, emerges COP21.

That's not strictly true, is it?

It isn't. COP21 is a climate conference. Close to 50,000 people will chalk up a heap of emissions to congregate in Paris on Monday for the fortnight-long event. COP21 is shorthand for the 21st Conference of the Parties to the UNFCCC.

And what is the UNFCCC?

The UNFCCC is the UN Framework Convention on Climate Change, agreed upon at the Rio Earth Summit in 1992 and in force since 1994, which sets out the approach for dealing with greenhouse gas emissions and celebrates the letter C.

Who is signed up?

Pretty much everyone: 195 countries and the European Union.

And what do they want?

The goal for Paris is a universal, legally binding deal on emissions that would restrict global warming to no more than 2°C above pre-industrial levels. That would require a cut in emissions of between 40 and 70 percent over the next 35 years. It has widely been described as a make-or-break moment.

Haven't we had a make-or-break moment before?

You're probably thinking of COP15.

COP15 was an elaborate Nordic fantasy film about rugby. 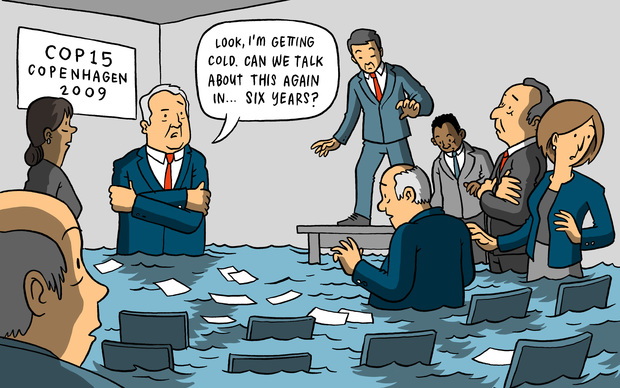 Are they doing it differently this time round?

Since Copenhagen, the UN has adopted a "bottom up" approach for climate commitments. As of this week, 170 countries, representing about 93 percent of global emissions, have submitted INDCs.

And what is New Zealand's?

In July 2015, the government announced a target of reducing emissions to 30 percent below 2005 levels by 2030, which is another way of saying an 11 percent reduction on 1990 levels.

The government says it's our "fair share", and it's "ambitious".

Yes it's a no. As OECD environment director and former New Zealand cabinet minister Simon Upton puts it, New Zealand is "not doing enough", which makes it "like every other country in the world"

How will NZ achieve the cut?

"Through a mix of domestic emissions reductions, the removal of carbon dioxide by forests and participation in international carbon markets."

And what is the plan to reduce domestic emissions?

Hard to say. Life is full of mysteries.

What is New Zealand's contribution to global emissions?

Tiny as an absolute proportion, but high on a per capita basis, where we come in as the fifth highest emitter in the OECD.

Don't we have renewable energy sources?

We do, but half of New Zealand's emissions come from agriculture, which is integral to the economy.

Dairy farming continues to intensify, with more than five million cows now producing milk in New Zealand. Most of the methane and nitrous oxide emissions come from cattle farting and belching.

The flue-gas stacks of New Zealand are to be found on the backsides of cows.

Are nations' combined targets enough to cross that 2° line?

Nowhere near. The INDCs as they stand would lead to roughly a 3° increase.

Some say we will "need a miracle" to keep temperatures below that 2° hike, but others are more optimistic, saying - as John Key did earlier this week - that Paris could pave the way for further agreed reductions, at the conference and beyond.

Whether to revisit the "differentiated responsibilities" principle that loads the bulk of responsibility on developed countries, and considerably less on developing countries including China, India and Brazil. How to compensate poor countries. And how to monitor and enforce pledges made.

What does a degree here or there matter anyhow?

The 2° target has been identified as an approximate tipping point for many irreversible climate change effects, including the melting of Greenland's ice sheet and an outpouring of greenhouse gases from permafrost thawing.

Scientists say the higher the warming, the greater and more severe extreme weather events will become; sea levels will rise, along with the number of climate refugees and threats to food security and biodiversity.

Were no effort made to reduce emissions, temperatures could rise by as much as 4.8° by the end of the century, according to the Intergovernmental Panel on Climate Change.

New Zealand will be OK, though.

Yeah, nah. Just last week, the Parliamentary Commissioner for the Environment published a bracing report urging the government to do more to prepare for rising sea levels.

In any case this whole anthropogenic global warming malarkey is widely thought to be nonsense. Doesn't add up.

Let's not do this.

It's all there on the internet.

No doubt. It's just that there's near unanimity among scientists.

What impact will the recent Paris terrorist attacks have on COP21?

Practically, very little, organisers say. Security will be enhanced and demonstrations banned. Some have suggested the attacks will foment less grandstanding and more collegiality.

After the 15th shindig embarrassments, a more mature COP prepares for a 21st with most of the world in sober concord.