The creator of a vandalised Wellington art installation commemorating fallen soldiers hopes to salvage what is left of the exhibition and move it elsewhere.

Artist Chris Bennewith's Remembrance, which is made up of 860 white poles, was due to stand in Appleton Park in Karori until 2 December, but will now be removed by the artist tomorrow after suffering significant damage on Saturday night.

The white poles bobbed in the breeze during the day and glowed with red light as the poles moved in the wind by night, in a scene the artist likened to a poppy field.

The installation took two years to design and build but will now be removed just 10 days after it was unveiled.

Mr Bennewith said he did not want to reinstall the artwork in Karori, but was open to moving it to another Wellington suburb.

The Wellington City Council said balls were ripped from poles, poles were torn from the ground and some were taken completely. A locked transformer box was also forced open and cables removed.

The council had earlier said the installation was damaged "beyond repair". 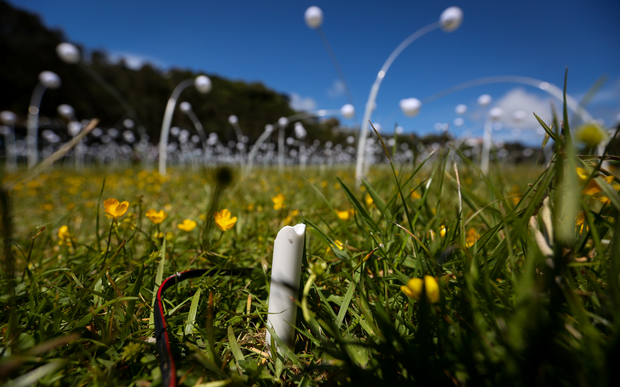 Balls have been ripped from poles, poles have been torn from the ground and some have been taken completely, the Wellington City Council said. Photo: RNZ / Alexander Robertson

Councillor Andy Foster said he hoped other artists were not discouraged by the vandalism.

"We've had an initial conversation about, what do we do with providing surveillance - whether it's physical or electronical surveillance - to potentially vulnerable installations," he said.

"The last thing we want to do is people putting hundreds of hours into something and then [have] some Neanderthal come along and just destroy it. It's pretty sickening, really."

Mr Bennewith, however, dismissed the suggestion better surveillance was needed.

"It's not something I want - a security guard sitting on my work 24/7 - financially it's quite unfeasible but in terms of the experience of the work as well. It's not ideal to have somebody there, a security guard watching people."

Mr Bennewith hoped to salvage what was left of the exhibition and move it to another suburb.

Meanwhile, in a separate incident on the other side of the world, ANZAC graves in a sleepy English village have been vandalised.

ANZAC soldiers wounded in World War I were treated in a military hospital at Harefield north-west of London, and those who died of their wounds were buried in the cemetery of St Mary the Virgin Church.

Local councillor Jane Palmer said the graves had been damaged for the second time this year and had been desecrated in the most distressing way, such as being daubed in blue paint.

"I stood in front of it and there were just tears in my eyes. It's just a very, very deep emotion. I mean, the village are passionate about these graves. It's a very big part of our history.

"And to see somebody's utter disrespect for people that lost their lives in war is just was too much for me at that moment in time."

Ms Palmer said she was talking to the police about the incident and would also raise the matter with the Hillingdon Council.

In tears this morning at this desecration of #Harefield Anzac War Graves @Hillingdon @MPSHillingNorth pic.twitter.com/mq36byMGsL