The wife of Davender Singh couldn't explain to police how her finger got cut or where the abrasions on her neck came from, a court was told. 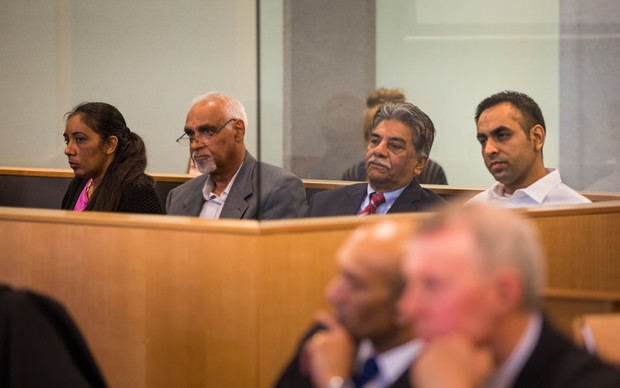 In the Auckland High Court (from left): Amandeep Kaur, a translator, another translator and Gurjinder Singh. Photo: RNZ / Claire Eastham-Farrelly

Today, police interviews with the pair were shown to the jurors, in which Ms Kaur confirmed it was Gurjinder Singh who stabbed her husband.

"You've got abrasions on the side of your neck. You said you stayed out of it, so how did you get the abrasions to your neck?" Mr Bower asked.

Ms Kaur replied she didn't know how she got the cut.

Mr Bower suggested it was because she had helped her lover kill her husband.

But Ms Kaur said everything was going well with their relationship, and she and Davender planned to return to India.

She denied any involvement in the killing but said it was her lover, Gurjinder Singh.

As her husband was stabbed to death, he turned to her and said "look what he has done", she said.

Ms Kaur also admitted making up a story about a stranger coming to the car window and stabbing her husband, because she wanted to hide her affair with Gurjinder Singh, a work colleague.

She confirmed she was protecting her own reputation.

Court told of declaration of love

Mr Bower also asked about the last text messages sent between her and Gurjinder Singh, in which they declared their love for each other.

She said that was three weeks before the killing and they had not been in touch since.

Gurjinder Singh's police interview has also been played to the court.

Initially, he told police that he and Ms Kaur were work colleagues and that was as far as their relationship went.

But Detective James Gemmell read out a series of intimate text messages between the pair.

Gurjinder Singh confirmed there had been an affair but said he didn't love Ms Kaur.

He was then played an excerpt of Ms Kaur's interview, where she said it was Gurjinder Singh who stabbed her husband.

He smiled as the footage was shown.

When asked by Mr Gemmell why he smiled, he said it was because Ms Kaur was trapping him.

He denied carrying out the killing and said she was just making up a story.