A young New Zealander had to hole up at a Paris cocktail bar just a block away from La Belle Equipe, a popular bistro where at least 19 people were killed in a gun attack. 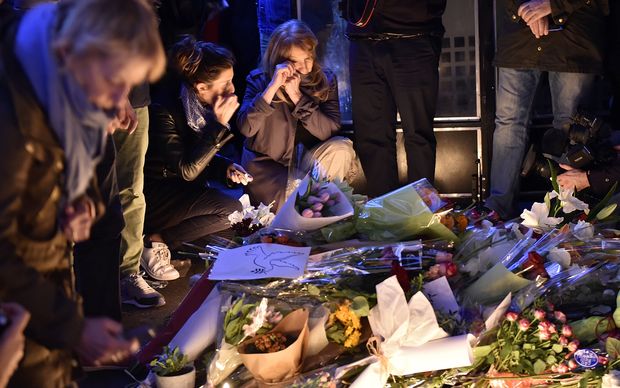 Wellingtonian Hannah Smellie, 22, was in Paris on holiday with her mother. She and her mother had been about to leave the cocktail bar, but were stopped by another woman.

She said the woman told them there was shooting and bombings going on outside and they had to stay where they were. They remained at the bar until 3am.

When they finally left a man thanked her for keeping people calm.

"I ended up being a bit of a DJ and I was putting on some feel good music and he said thank you for keeping it positive, because a lot of people were quite scared."

Ms Smellie and her mother then managed to get a taxi, happening to find one that had just come into service, and she said it was surreal driving through the city after the terrorist attacks.

"(I) saw ridiculous - I've never seen anything like it in my life - ridiculous amounts of police officers, soldiers, all that, everywhere, everyone with guns. All you can hear are sirens, the streets absolutely empty and like at that point that's when I realised how serious it was."

She praised the Parisian response to the attacks.

"One thing that was amazing; I think the French have a bit of a reputation of not being accommodating to people, but at that time of terror they were amazing."

Ms Smellie said she felt very lucky to be alive.

"Paris is a huge city and the fact I was a block away from where 19 people were killed is mindblowing."

Another Wellington woman living in Paris, Charlotte Pleasants, said she had spent the day inside after the attacks.

Ms Pleasants said the attacks had definitely put a cloud over the city.

"Tonight, as a sign of solidarity people are putting candles in their window so we are going to do that here."

New Zealand's Ministry of Foreign Affairs and Trade confirmed on Saturday that there were no New Zealand casualties among those who had died in the attacks.

Today, the New Zealand Embassy in Paris has confirmed that no New Zealanders were injured in the terror attacks.

But Mr Key said he would still travel to the city at the end of the month for the United Nations conference on climate change.