The Accident Compensation Corporation (ACC) has been accused of being stingy to families of severely disabled children.

It is battling a group action in the Court of Appeal over how much it should pay parents who give up work to look after their children.

If the parents win, they would be entitled to millions of dollars in compensation, stretching back decades. 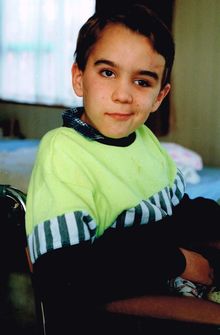 Among them are Nelson parents Erica and Gordon Palmer, who call their son a 'miracle boy'.

In 1991, Luke Palmer, who was 9, was struck in the head by an airborne motorcycle at a motocross event near Nelson.

He at one point survived his life support being switched off, and later a blood clot in his head.

"He was going to die, he was in such a bad state with the blood clot switching from his leg to his head," said Mrs Palmer.

"After four days of expecting him to die, he didn't... we don't know why - our miracle boy - but he was worse after that."

Gordon Palmer sold his business to help his wife, as looking after Luke alongside two other young children became full-time work for two people.

But the ACC only paid them attendant care for 35 hours a week.

"We ran his rehabilitation from home. It meant that we had another bed in Luke's room and we took turns sleeping in there with him," said Mrs Palmer.

"We would wake up the other half whenever Luke needed turning or changing because he had wet the bed, or was having a seizure... it was intense."

Dealing with ACC was always difficult, they said.

"I always feel stressed dealing with them because you feel like they're going to take something away from you," said Mrs Palmer.

"They still don't give you a good indication of what you're entitled to," added Mr Palmer.

"It's more a case of them paying what they have to, or what they can't get out of paying."

The Palmers are among 30 families battling for backdated compensation, but ACC argues if care was not given for a full 24 hours a day, it would not pay.

The families have already won the case before the Accident Compensation Appeal Authority and in the High Court, and now go to the Court of Appeal in February.

The families are led by lawyer John Miller, who in 1996 won a similar class action, which led to 300 families being paid more than $200 million.

After that, ACC tightened its rules about who could apply for compensation, Mr Miller said.

"If the mother is up, say three times a night, ACC will pay them for the 10 or 15 minutes they were up, but it means the parent can't get back to sleep, or is in this heightened state of awareness," he said.

"You have to be 'on' all the time with a cerebral palsy baby because that sudden intake of breath could be the last."

ACC would not comment while the case is before the court.