More than 1000 government workers have gone on strike for two hours to protest about work conditions at the Ministry of Business, Innovation and Employment (MBIE). 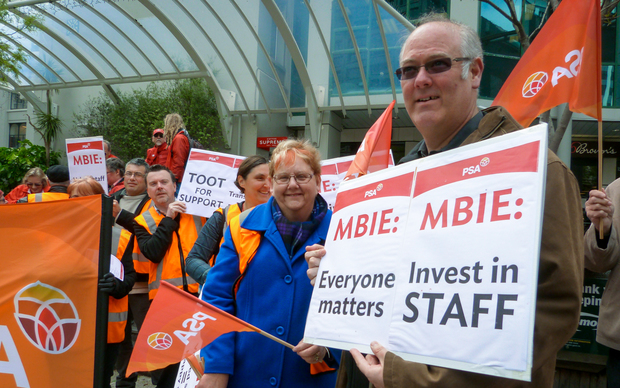 "Managers would also have the opportunity to recommend additional increases, in addition to the minimum guaranteed 2 percent," she said.

However, the union said that was not true.

"MBIE have offered 0 percent pay movement across the board, and won't take any action to fix a poor workplace culture that is hurting morale," union national secretary Erin Polaczuk said.

"MBIE workers want to be able to go home at the end of the day proud of what they've achieved but their bosses are making that harder every day."

In Wellington, dozens of workers carrying flags and placards marched through the central city, while in Auckland, workers marched down Queen Street to Queen Elizabeth Square.

An MBIE spokesperson said in a statement the strike would not disrupt its essential services.

"This means all immigration at airports around New Zealand will remain open and adequately staffed during any industrial action."