A 24-year-old corporal has pleaded not guilty to kicking and grabbing another woman by the throat following a fight over pre-loading on vodka. 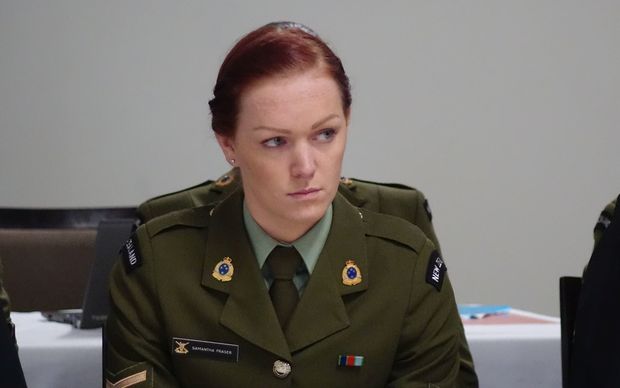 Samantha Fraser is facing three charges of common assault in the military court at Linton Army Camp in Palmerston North, in relation to an incident in New Caledonia on 25 January.

In her opening address this morning, prosecution lawyer Rebecca Thornley said the two women were out clubbing in Noumea and fought because Corporal Fraser wanted to go back to drink the complainant's vodka at their hotel.

Ms Thornley told the court that, when the women walked back to the hotel together, Corporal Fraser grabbed the other woman by the throat and tried to get the room's key off her.

She said once they were inside their room, Corporal Fraser grabbed the woman by the throat again - holding her up against a wall for some time, then kicking her while she was on the ground.

Her defence lawyer, Paul Murray, said Corporal Fraser was not denying that there was a physical disagreement between her and her friend, and that there was some pushing, shoving and grappling which might have resulted in her friend falling to the ground.

However, he said there was no grabbing of the neck and strangulation, and Corporal Fraser did not kick her once she was on the floor.

The first witness to be called was the complainant, who said the two women had been best friends for several years and her father, who is in the army, encouraged them to go on the holiday to New Caledonia together.

The complainant, who was 19 years old at the time, was emotional this morning as she told her version of what happened during the holiday.

She had several issues with Corporal Fraser's drinking, she said, and Corporal Fraser had a messy night several days before the alleged assault in which she passed out in her bed and vomited.

After that evening, she said Corporal Fraser asked her to keep an eye on how much she was drinking and to gently remind her not to drink too much by asking how much she had consumed.

On the night when the alleged assault took place, the complainant said she, Corporal Fraser and four other friends had been drinking in a hotel room then left for a bar when security told them off for being too loud.

She said, not long after the group arrived at the bar, Corporal Fraser asked for the room's key so she could go back and drink the vodka belonging to the complainant. When she didn't give it to her, she stomped out of the bar and so the complainant followed her down the road.

"She started coming toward me, saying 'give me the room key', and then she pulled up my top and pulled down my skirt trying to get [the] key."

She said Corporal Fraser then backed her up against a railing and grabbed her by the throat.

Once the two women got back to the hotel, the complainant said Corporal Fraser would not let her leave the room and pushed her up against the wall by the throat.

"I was in complete shock and I was feeling really dizzy and then I remember hitting the floor," she said.

"I felt huge kick to my side, to my hip, I curled into a ball and next thing I felt a kick to my shoulder and I heard her saying 'don't worry about your shoulder, that's the least of your issues now'."

She said she remembered being kicked repeatedly.

The complainant said she told security about the incident but had difficulties because they did not speak English, so she spent the night at another friend's room.

The court has been shown several pictures of injuries taken by the complainant after the alleged assault.

The complainant's mother is also being questioned this afternoon, and the prosecution has six more witnesses to call up.

Several of the witnesses, who were socialising with the two women during their holiday, are from other areas of the Defence Force.

The trial is expected to last three days.