Ra Fowell just wants to go home to look after his dying partner.

But Australian authorities refuse to release him from the Villawood detention centre in Sydney. 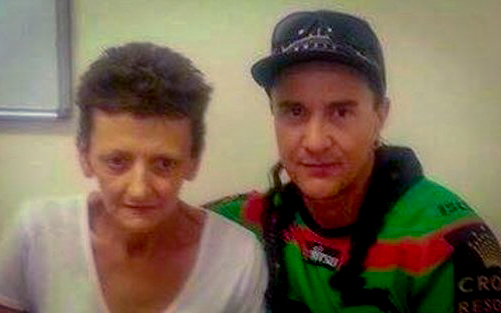 If they keep him locked up until he is deported back to New Zealand, it is likely his partner Carmel Stanwell will die alone.

Ms Stanwell has terminal lung cancer and is already finding it difficult to breathe.

Neither she nor Mr Fowell, who said he was originally from Rotorua, could understand why he was being kept in detention, rather than being allowed home to look after her.

While he spent a year in jail, it was not for serious or violent crimes.

In Mr Fowell's case he had driven while disqualified and been caught in possession of cannabis. That was enough to be imprisoned and under Australia's tough new regime he is now being held in detention before being deported.

He has been able to visit Ms Stanwell but the last time was early September. Meanwhile, her condition worsens.

"It is just horrible watching her fade away in front of me and I can't do much about it," he said.

But even worse is the fact that for much of the time he is not allowed to be there. He does call her every day.

"It is killing me every morning because I ring up hoping she answers the phone. That is how bad it's got."

Ms Stanwell said she needed Mr Fowell by her side.

"Now that it is getting worse, it is really hard, even just getting up to go to the shower, getting dressed," she said.

The couple cannot afford a lawyer to take up their case but Mr Fowell has made a complaint to the Australian Human Rights Commission.

The commission, however, has told him not to get his hopes up and that ultimately it is up to the Australian Immigration Service as to whether he gets released to look after Ms Stanwell.

She has a simple plea.

"We are just asking for him to get released...just let him out so he can help me because I need some help."

Ms Stanwell said she did not know how long she might live. She had never asked because she wanted to remain positive.

But she knows she is dying.

"Every breath is a struggle. It is on your mind. You don't get any break from it."

Mr Fowell said he posed no risk of fleeing should he be released to look after Ms Stanwell.

"I will come back to New Zealand. I just don't want to leave her like this. Something's got to change. It is wrong."

Ms Stanwell was realistic that the Australian authorities might continue to be indifferent to her circumstances but she said their campaign might help others.

"If it does not help us it will help someone else. They won't have to go through what we are going through."