Ten World War I New Zealand nurses, who died after their troop ship was torpedoed by a German U-boat in the Aegean Sea, are being commemorated this weekend. 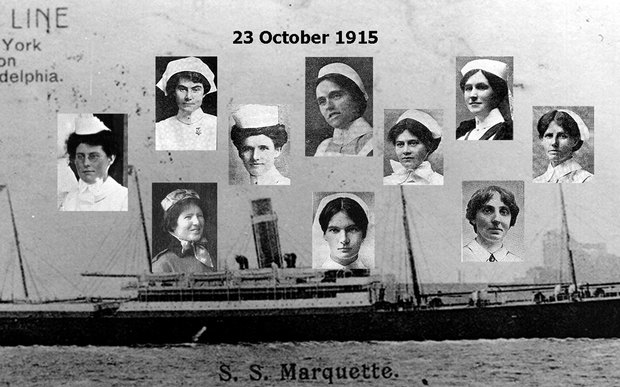 As well as the nurses, 19 male medical orderlies and three New Zealand soldiers also died along with 135 others, mainly British troops, when the HMT Marquette was sunk enroute from Alexandria to Salonika in Greece.

Why the New Zealand Number One Stationary Hospital was on board a ship carrying troops and munitions, and not on a hospital ship, remains one of the mysteries of the war.

Among the survivors were 26 New Zealand nurses, including Elizabeth Young, who recalled that fateful day.

"I was standing with two other sisters looking over the side and one of them said, 'Oh, look at the funny little thing coming through the water.'

"Just then the bells went and an officer alongside said it was the tail of a torpedo and then there was a sudden bang in the ship."

Another nurse, Mary Gould, remembered: "We were all up on deck walking after breakfast and all of a sudden there was this bang.

"I happened to be facing forward and we saw the smoke coming up from the explosion from the foredeck and we realised we had been struck by a torpedo."

The ship sank within ten minutes and, as Ms Gould recalled in 1967, abandoning the ship for lifeboats contributed to the death-toll.

"The (life) boats were very badly lowered and I am sure, had there been British officers, there would not have been the disaster in lowering the boats that there was," she said.

"And the boat that I was in, they let go of one end, so the boat upended and we were all capsized out into the water from the rails and it was quite a height and on the other side, the boat with the girls in it was lowered and another boat was let down on top of it.

"Killed some of them, broke some of their legs, that sort of thing. It was a dreadful bit of mismanagement."

She said the nurses were very surprised they were on a troop ship.

The survivors were rescued some six hours later.

Ministry for Culture and Heritage military historian Gavin McLean, who authored White Ships: the History of New Zealand Hospital Ships in the First World War, said the Marquette was a legitimate target for the enemy, unlike a hospital ship.

He said following a lengthy inquiry, the decision to include the medical team on board was put down to a simple mistake.

"Historians talk about conspiracy theories and cock-up and my view, along with I suspect most historians', is that 'cock-up', nine times out of ten, is the reason things happen. It was just a stupid error."

Mr McLean said coming not long after news of the horrors of Gallipoli, the New Zealand public were shocked by the sinking of the Marquette.

"There was a great sense of shock and certainly the fact that New Zealand women, mainly South Island women, were lost in that sinking.

"This was the first time that the submarine started to make a real emotional impact on people."

Transporting medical staff by anything other than a hospital ship never reoccurred again in war.

"In view of the loss of the Marquette my Government would be glad if arrangements could be made whereby medical units should, when possible, be transported by sea in a hospital ship." 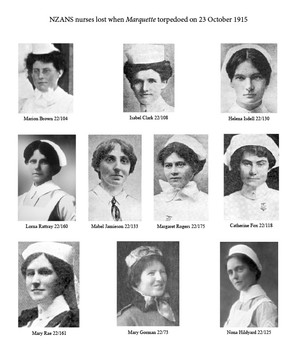 The ten nurses who were killed on the ship. Photo: Supplied/S McNabb

She said the New Zealand nurses that survived the sinking of the Marquette were very resilient.

"They all knew the risks, our women were as patriotic as the men, they wanted to do their bit.

"Marquette is something we should remember because they did give their lives for their country."

While the shock of what had happened resonated in New Zealand for a long-time, Ms McNabb said it did not affect the recruitment of nurses for the war effort.

The centenary of the sinking of the Marquette will be commemorated in Christchurch this coming weekend and includes a service of remembrance at St Michael and All Angels Church on Friday evening attended by the Governor General, Sir Jerry Mateparae.