Three of New Zealand's most offensive and controversial place names will be changed if the public supports a proposal before the New Zealand Geographic Board. 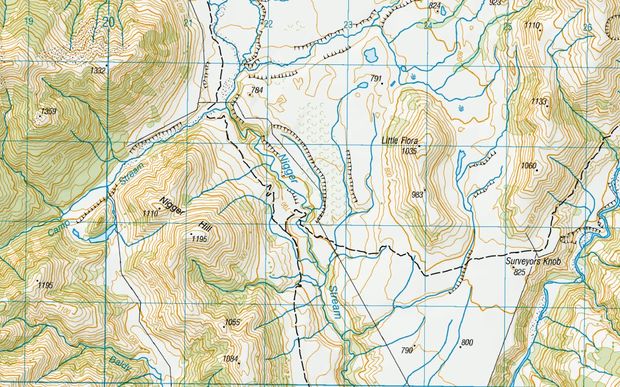 There is a proposal to change the name of Nigger Stream Photo: NZ Topo Map screenshot

Three place names using the 'n-word' - Nigger Hill, Niggerhead and Nigger Stream, which are all in the foothills of the Southern Alps - are likely to be replaced.

The names have been in use for 150 years and there is no well-known story behind why they were chosen.

The proposed replacement names are Kānuka Hill, Tawhai Hill and Steelhead Stream, which have been suggested by the person who submitted the proposal because they represent native trees in the area and also a type of trout, the steelhead.

But it's likely Ngāi Tahu will submit its own suggestions to the board during the consultation period, which runs from the end of October through to January.

There is also a Darkie Creek in Auckland, and three other 'Darkies' names in Westland. These appear to be named after 'Darkie' Addison, a highly successful African-American prospector who made three major gold discoveries in the 1860s. There are no proposals to alter any of those names.

Other potential changes announced by the New Zealand Geographic Board (NZGB) include changing the name of Rainbow Mountain to Maunga Kākaramea.

Another proposes to correct the spelling of three names in South Otago from Tokomairiro River to Tokomairaro River.

NZBGB's secretary Wendy Shaw says, "While both spellings were used from the mid-1800s, the NZGB accepts that Tokomairaro is correct and describes the method of pushing waka (canoes) or mōkihi (rafts) along the river with a pole".

And one of the Wairarapa's oldest settlements, Lake Ferry may have its name reconsidered in another proposal currently before the board.

Yesterday the Waitangi Tribunal recommended that Whanganui be spelt on all occasions with the 'h', and never as Wanganui. The Tribunal said there is only one correct way of spelling the place name.

The NZGB has also recommended that macrons are added to a number of place names, but other Maori place names, which are misspelt, remain unchanged.

Meanwhile, there is one place name that could be quite easily spelt wrong: New Zealand is home to the longest place name in the world -Taumatawhakatangihangakoauauotamateaturipukakapikimaungahoronukupokaiwhenuakitanatahu.

It contains 85 letters, 27 more than the next longest name in Wales which is Llanfairpwllgwyngyllgogerychwyrndrobwllllantysiliogogogoch.

The NZGB has recommended macrons are added to the following names on maps and charts. These are recorded (not official) names: