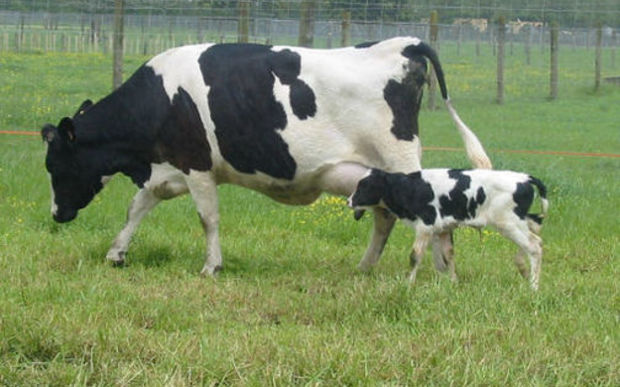 A transgenic cow with her calf. Photo: Supplied/Biotech Hub

It is authored by Claire Bleakley, president of GE Free New Zealand, who told Morning Report that the animals were suffering inordinately from chronic illness, unexplained deaths and severe deformities as a result of the foreign DNA inserted into the embryos.

"[The report] is a catalogue of disasters. AgResearch has constantly said that there is no problem, and that the animals suffer from basically normal farming disorders. When you look at this, these animals are suffering inordinately - from sterility, from chronic illness, from sudden death," she said.

She said AgResearch hadn't been honest about the pain the research has caused for animals but that the problems went beyond animal welfare: "This is a problem for the moral and ethical values for New Zealand and how it does research."

GE Free said the deformities have included animals born with no bladder, club feet and fused necks, many of whom lived for only a few hours.

The group said it got the details through Official Information Act requests to AgResearch and from the Crown institute's own reports.

Dr David Wells, a principal scientist in the reproductive team at AgResearch, said that there were issues, but that the work was promising.

"We acknowledged that there are animal welfare concerns with the current technology - rather the methods we've used to generate those embryos. Many of the deformities that have incurred [are due to] incorrect programming.

"Through cloning, they are occurring at a higher incidence," he told Morning Report.

He said that the report was one-sided, and AgResearch did what it could to prevent animals suffering, including having a dedicated veterinarian and animal husbandry team.

Dr Wells said the work was cleared ahead of time by an ethics committee, but that they were moving away from cloning and so would hopefully have a smaller margin of error.

"We are very excited with the prospects of gene editing - some of that has the opportunity to inject these tools into fertilised zygotes, and therefore we don't need to use the cloning technology and we would expect better outcomes."