The US is trying to turn Kim Dotcom's extradition hearing into a rubber-stamping process, a defence lawyer says. 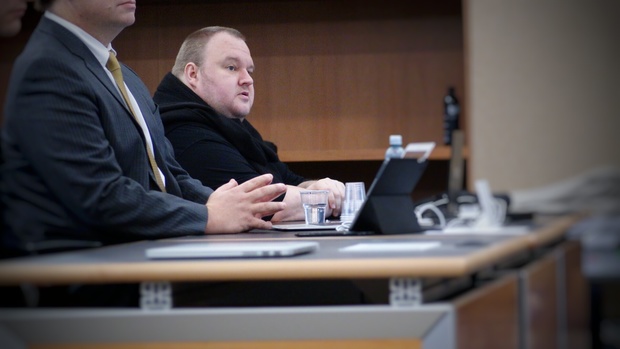 The hearing to decide whether Mr Dotcom and three other men - Mathias Ortmann, Bram van der Kolk and Finn Batato - should be sent to the US to face copyright violation, money-laundering and racketeering charges has resumed today

The men have asked the North Shore District Court to delay or even halt the proceedings, saying the US has prevented them from hiring expert witnesses they need in their defence.

But Crown lawyer Christine Gordon, who is representing the US, said the court only needed to be satisfied there was a case against the men on the face of it.

Grant Illingworth, who represents Mr Ortmann and Mr van der Kolk, said the US was asking the court to accept its interpretation of extradition law and its spin on the evidence, without letting the men challenge that.

"The US [approach] would render the extradition process largely meaningless."

Hearing to run into fifth week

The hearing was due to end today but will now run into a fifth week after a series of delays and adjournments.

The Crown, on behalf of the United States, has delivered its arguments against the men.

However, the main hearing has been on hold for nearly two weeks now while the defence lawyers present a series of applications to the court arguing for the hearing to be either put off or halted altogether.

Only one of the three applications has been heard so far and the defence still has to present its main argument against extradition.

Five out of a possible 20 hearing days have been lost to adjournments, either while lawyers prepared their arguments or Judge Dawson decided what order the hearing would go ahead.