The Foundation for the Deaf is calling for more television programmes to provide the option of captions.

Just under a quarter of new programmes on free-to-air television have captions available as a choice, and they are available for news broadcasts only between midday and 11pm.

The foundation's chief executive, Louise Carroll, said countries such as the United States and Australia had legislation ensuring continuous captioning on all free-to-air channels.

She said the captioning in New Zealand was some of the best in the world, but there was just not enough of it.

"It's isolating and you're marginalised, which is actually really distressing, because when you go to work people are talking about television programmes and you can't participate.

"So we can't see the current programmes - it's incredibly isolating."

Before last year's election, the Green Party said its policy was for TV stations to provide captions on all programmes.

The Green policy would have required Television New Zealand to have 100 percent captioning by 2017, TV3 by 2020 and other broadcasters on a case-by-case basis. 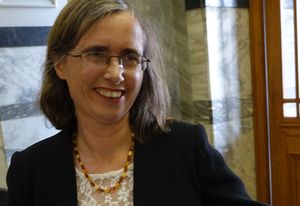 The party said New Zealand's 24 percent of programmes having captions compared poorly with 85 percent in Australia and 99 percent in the United States and Britain.

Green MP Mojo Mathers, who is deaf, said it was not fair to lock out the more than eight percent of the population who are deaf from information on television.