Dunedin police are investigating an online threat to carry out a shooting at the University of Otago tomorrow.

The threat was posted on an online bulletin board shortly before midnight last night and police said they were working closely with the High Tech Crime Group in Wellington, and also with the University.

The anonymous posting on the 4chan discussion group included a picture of a gun and referred to other 'massacres and shootings'.

Inspector Melanie Aitken has reassured university staff and students as well as the wider Dunedin community that all safety measures were being taken while police investigated who made the threat and if it was genuine.

Police have informed the University of a security threat made on social media. Read our statement: http://t.co/Jiv7q9S61N

Ms Aitken said the advice was to be alert and vigilant but not alarmed.

She said it was being taken seriously and officers were maintaining a high presence on campus.

"We are also asking those in the University area to report any suspicious behaviour immediately to police.

"We understand that a threat of this nature could be concerning to some people. Police, Otago University and Campus Watch staff will be available to speak with anyone who has concerns."

The police have not confirmed that the threat is about a shooting but Radio New Zealand has seen the online message.

Radio New Zealand reporter Belinda McCammon told Checkpoint that the message was posted about 11.30pm on Monday and has since been deleted.

Otago University threat - Dunedin Police are aware of a threat made via an online post that relates to the Univers... http://t.co/JGMeRszuBe

A spokesperson for the university said they were taking the threat seriously.

The university, and its student association, referred all other inquiries to the police.

But the university has sent an email to students and staff to let them know about the security threat, and has also been contacting students by text message. 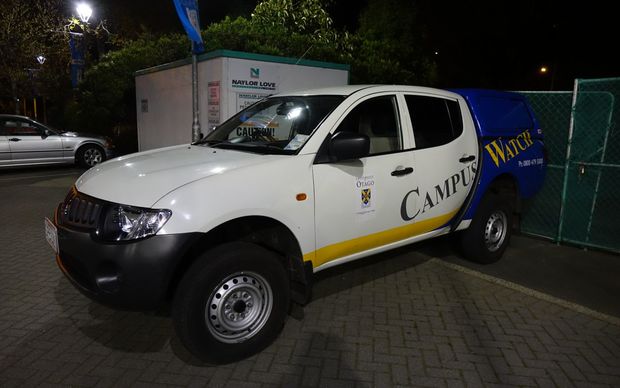 One Otago University student said she was not going to campus tomorrow following the online threat.

Ileana Lameta, a Health Science student at the university, said she had just found out about the threat, and was in disbelief.

Ms Lameta said the police presence on campus was reassuring, but she would be staying home tomorrow, just in case.

"It seems so foreign, it's not something you really hear about in New Zealand.

"People make a lot of really inappropriate jokes on the internet about this kind of stuff, I think you have to treat all of it very seriously."

She said she was not sure if the campus could be completely secured, because it was so big.

But another student said she did not feel like she was in any immediate danger despite the security threat.

Katy Hendrikse, 22, who is studying law and commerce, said it seemed likely the threat was from someone looking for attention.

"I don't think anyone's feeling in any immediate danger. Most people think it's someone trying to be a little bit funny or a little bit controversial, and everyone's just a bit annoyed that someone might make light of it.

"But obviously when someone makes a threat like this, you have to take it seriously."

Ms Hendrikse said she expected low student attendance at the university tomorrow in light of the threat.