Train passengers caught evading fares could face fines of as much as $1000 under new rules giving ticket inspectors more powers.

Transport Minister Simon Bridges has announced a law change will apply to Auckland trains from next year. 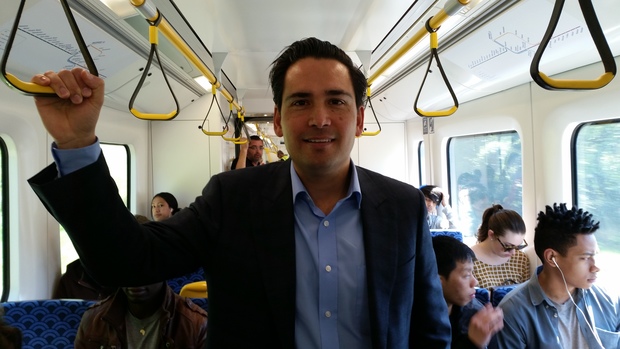 Under the new law, enforcement officers will be able to ask passengers to produce their ticket or HOP card, and remove passengers from trains if they refuse to pay.

As is currently possible, fare evaders could also face an infringement fee of $150 or a maximum fine of $500 on conviction, if evidence of a fare cannot be provided.

But enforcement officers will also be able to ask fare evaders to provide their details or leave the service. If they do not comply they can be fined as much as $1000 on conviction.

Mr Bridges said changes to the Land Transport Act in 2016 would focus on Auckland trains, but had the potential to be expanded to Auckland buses and public transport throughout the country.

Mr Bridges said more than five percent of all train passengers were not paying for tickets, and that was costing about $2 million a year.

"Fare evasion is actually public theft. It undermines those who pay for the services, it undermines the subsidies that are required from central and local government, and it ultimately undermines the integrity of public transport. So that's why we have this $1,000 fine on conviction, because we do think this is serious."

"Recorded public transport patronage has exceeded 80 million trips for the first time, with annual rail patronage up 22.7 per cent to 14.4 million. However actual patronage will be much higher and it's crucial we have accurate figures so we can properly plan for future service and infrastructure requirements."