"Two seconds later, two shots were fired from the police and it was all over. The guy was dead."

Homam Jassim stepped out of his barber shop in the Upper Hutt central business district today to see armed police running down the road with rifles.

They were heading for the McDonald's, where a man had fired a gun inside.

"Police were running around with guns towards McDonald's and all of a sudden we heard the police screaming 'drop the gun, drop the gun'.

"Two seconds later, two shots were fired from the police and it was all over. The guy was dead." 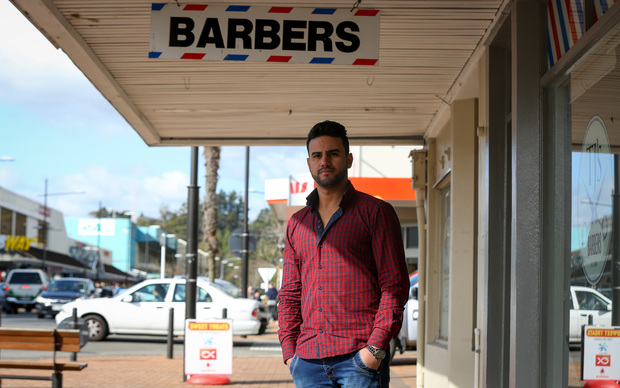 Superintendent Sam Hoyle said police negotiated with a gunman they fatally shot at the McDonald's but he refused to drop his weapon and fired shots towards officers.

Customers and staff were in the restaurant during the lunchtime incident but no one else was hurt.

Officers gave the man first aid but he died a short time later and his body remained at the scene.

"No one else is being sought in relation to the incident and police reassures the community that they are able to safely go about their business." 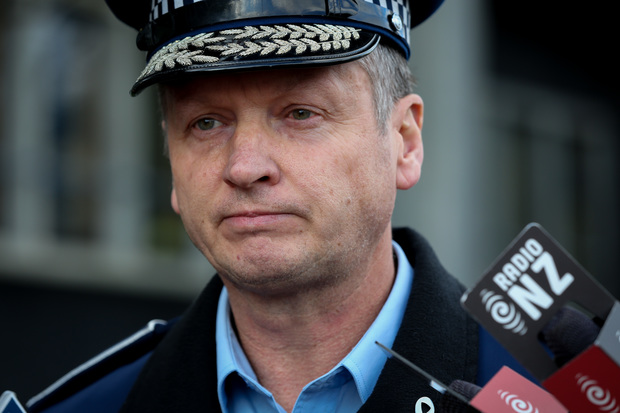 Mr Hoyle said it was not yet known why the man shot fired the rifle but that it was a tragedy for all involved, including the man's family and the police.

"The man's motivations for his actions and what was driving this behaviour will come out in the fullness of time," he said.

"The investigation is only a few hours old. Given where it occurred, we have dozens of people to speak with." 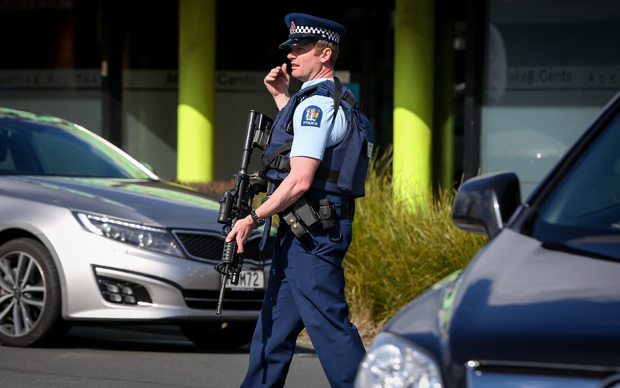 Police at the scene of the shooting in Upper Hutt yesterday. Photo: Radio NZ / Alexander Robertson

There has been an incident involving firearms in Upper Hutt involving one male. Further details will be released as soon as available.

Stacey Atkinson was in McDonald's with her two-and-a-half-year-old daughter and 10-day-old son.

She said the man had been sitting just two tables down from her earlier but did not realise at the time that he had a gun. However, she noticed he sat with no food for about 20 minutes.

"I heard this yelling, then gunfire, which I originally had thought was the coffee machine exploding - obviously it wasn't," she told Checkpoint.

"Then there was just lots of screaming and people started to move.

"I didn't realise what it was at the time (and) then people started walking past me and saying 'get out, he's got a gun', so I got out."

Ms Atkinson said it was not until she was out in the street that it sunk in what had happened.

"While I was still inside the restaurant, and people were saying 'he's got a gun', all I could think was 'I've just got to get out of here'," she said.

Ms Atkinson's husband, Chris Atkinson, said his wife texted him to tell him what had happened.

"At first I didn't believe it. I texted her back and I said 'surely you've got to be joking' and she texted back and said 'no, he just started firing his rifle. I think he was firing it at the roof'."

Ms Atkinson went next door to an optometrist's, where they locked the door and hid at the back of the shop.

A McDonald's spokesperson said no staff or other customers were harmed but the restaurant was now a crime scene.

She said it was expected to be closed for a couple of days.

Claire Blakmore said she was walking into the Countdown supermarket when she heard a loud noise. 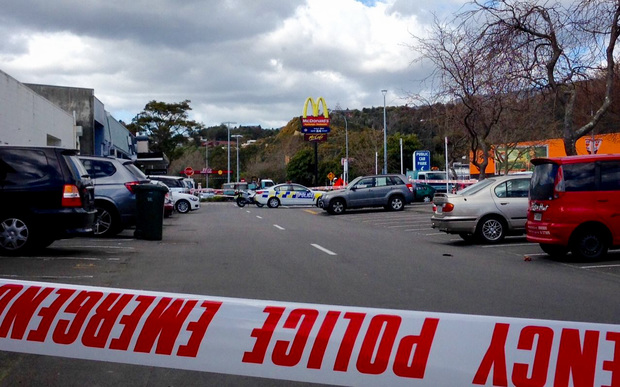 "Once I got into the supermarket they put over the speaker that there was a gunman on the loose, from then I realised that the noise I heard from before was a shot.

"I came back to work... and we heard two more shots...it was quite scary really."

She said the police came into the optometrist where she worked and told people to stay inside and away from the windows.

Holy shit my son was just by an armed shooter in Upper Hutt. He got some footage on his phone of the take down. Scary shit.

When you find out on Twitter there's a gunman loose in Upper Hutt & your kids are at school in Upper Hutt and you are in Auckland.

I've actually never seen so many police actually at Upper Hutt police station. I'd thought it abandoned until now. pic.twitter.com/OQayIVWGUv

"I was right opposite McDonald's when I heard what I thought to be a shotgun go off, and I saw a whole lot of people come running and screaming outside of the shop."

A teenage witness said he saw the whole thing unfold and it was traumatic. He said police fired two shots. 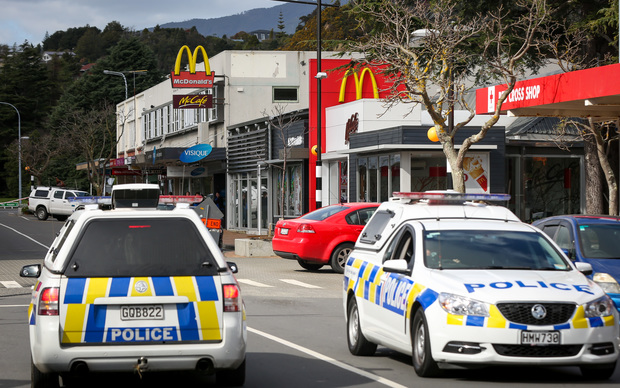 Periscope user Vasely Sapunov filmed some of the incident from a car near the cordon.

At the start of the video, a female police officer can be seen standing at the corner of a wall while two other officers move down the street.

"I don't know what's going on but they've got the street blocked off," Mr Sapunov can be heard saying.

"There's cops on every corner. I can't drive out because this lady's losing her s***... I don't know what to do, I don't know whether I should drive or stay." 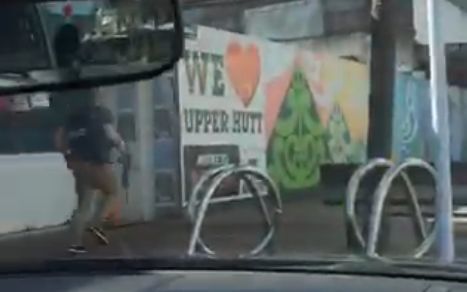 A police officer with what looks like a gun can be seen running down the street. Photo: Vasely Sapunov

The female officer can be heard telling people to get inside nearby buildings.

Mr Sapunov said in the video that he could see people running away from a block further up the street, which had been cordoned off.

He said there were "cops with dogs everywhere" and shots were being fired. 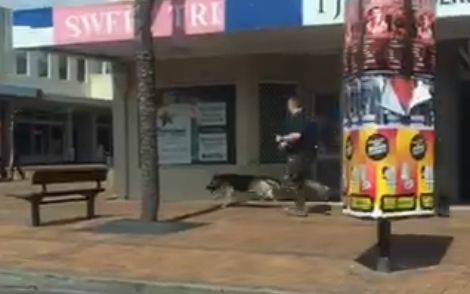 A police officer with a dog during the incident in Upper Hutt. Photo: Vasely Sapunov

Another group of police officers can then be seen moving down the street.

The Upper Hutt City Council was in lockdown but a spokesperson said it had since re-opened. 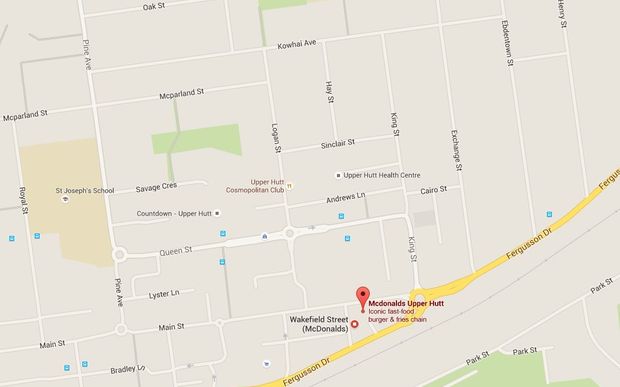 The McDonald's is in the centre of Upper Hutt. Photo: Screenshot