A report on the global impact of catastrophes says a sharemarket crash is the biggest economic risk to New Zealand, and would cost more than $6 billion.

Lloyds City Risk Index 2015 to 2025 looked at the economic exposure from 18 man-made and natural threats in 301 cities over the next ten years. 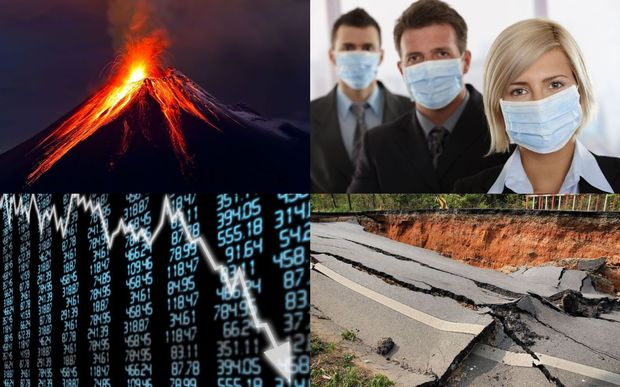 Four of the major disasters which are of the greatest economic threat to New Zealand. Photo: 123rf

The index said nearly $12 billion of New Zealand's economic output was at risk from threats like a human pandemic, cyber attack and solar storm.

It said the 2008 financial crisis revealed how contagion from one market can ripple through the world.

Other major risks to Auckland were a flood, an oil price shock and a volcanic eruption, each costing the city more than $800 million.

In Wellington, an earthquake was the second biggest risk, costing it nearly $300 million.

The Index did not look at threats to other New Zealand cities.

However, it said the world had never been more interconnected.

"Globalisation, driven by rapid improvements in information technology, has linked us all in ways previously unimaginable.

"More people are living in cities than at any point in history. These factors have played a key role in driving global economic growth.

"But they have also concentrated wealth in vast urban centres, which makes economies - national and global - more exposed to the impacts of manmade and natural disasters."

It highlighted the sub-prime mortgage crisis, Hurricane Katrina, and the earthquake and tsunami in Japan.