Parents who receive warnings about vaccinations are twice as likely to delay having a child immunised, research has found. 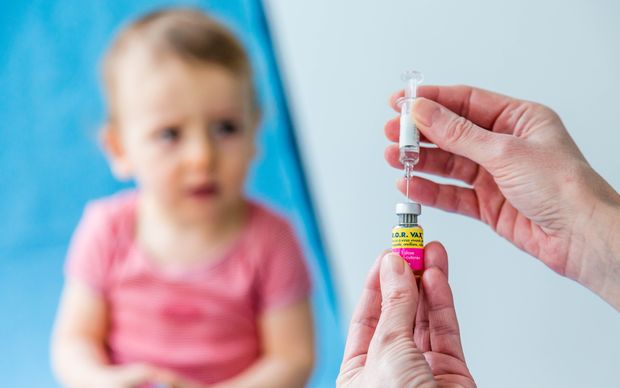 The research is part of the Growing up in New Zealand study, which tracks the development of approximately 7000 children from before birth until they are young adults.

The study found 56 percent of expectant parents reported receiving no information about vaccination, and of those who did receive information, 14 percent said it was discouraging.

Associate director of the study, paediatrician Dr Cameron Grant, said those who got warnings were twice as likely to delay them, at a time when their children are most vulnerable.

"Parents I think can maybe think 'oh we'll delay it', or 'we'll get them done but just wait'... waiting a bit longer isn't a good idea, it's really important to get them on time," he said.

Dr Grant said babies in their first year of life were particularly vulnerable to complications from serious diseases that could be prevented - including whooping cough, diphtheria, measles, polio, and some forms of meningitis and pneumonia.

He said the main source of negative information about immunisation came from family, friends, and various media.

However one in six parents who had been discouraged told the study a healthcare worker was the source.

"That included a variety of healthcare sources including ante-natal classes, or lead maternity caregivers, or family doctors, a whole range, so we were quite concerned by that," said Dr Grant.

The chief executive of the Social Policy and Evaluation Research Unit, Clare Ward, said it showed there was room for improvement.

"Given that many women reported that they didn't get immunisation, there are obvious opportunities to make sure that the information we have is accessible and received by those women and their partners," she said.

For Auckland mother-of-two Kelly Brake, vaccinations were a "no-brainer", and she had only heard bad stories from mothers who did not.

"I did know one lady that didn't immunise her children, she had six children, none of whom she immunised, and one of them decided to become a doctor, so her child had to go and get their lifetime's worth of immunisation in the space of about three months," she said.

Ms Brake said from what she learned about it from ante-natal classes and her midwife, it was not just about her and her baby.

"It can affect your children and their future decisions that they have to make, it can affect the wider community...and I think when you choose to immunise your children, it's not just yourself you're protecting, but everyone else," she said.