A Porirua man has been charged with the murder of a six-month-old baby who suffered the type of injuries seen in a high-speed car crash. 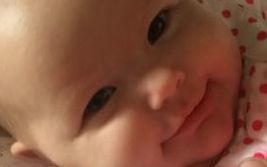 Michael Te Kouarehu Kereopa, 31, appeared in the Porirua District Court today, where a charge of assaulting a child was upgraded to murder, and name supression was lifted.

Kereopa is accused of causing the death of six-month old Gracie May McSorley in July this year.

Police said the child died as a result of severe head injuries, which Kereopa had claimed was due to an accidental fall.

Kereopa had been in a brief relationship with Gracie's mother at the time of the baby's death and was left alone with the child for 45 minutes on the afternoon of 6 July, while her mother collected an older sibling.

Police said Gracie was alert, happy and healthy when her mother left, but was noticeably unwell when she returned.

Gracie became unresponsive a short time later and an ambulance was called while her mother performed CPR.

The child was was air-lifted to Wellington Hospital and placed on life support, but died the next day.

Police allege that Gracie's injuries were similar to those that would be suffered in a high-speed car crash, and were deliberately caused by the defendant.

In a statement today, police said it was another "sad reminder of New Zealand's unacceptable levels of child abuse".

"We must all work together to keep our children safe and free from harm. Now a family is mourning the loss of a beautiful little girl at the hands of someone she should have been able to trust to care for her."