An Auckland man speaking from his own experience says he can understand why the number of eviction orders at Work and Income offices have risen significantly. 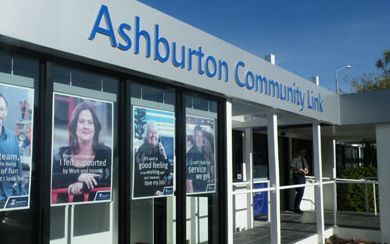 The Work and Income office in Ashburton, where shots were fired in September 2014. Photo: Supplied

In the past year, 11 staff were seriously assaulted and 413 beneficiaries trespassed from offices for threatening behaviour.

Lee Oaariki said he was recently forced to apply for a benefit when he lost his job, and it was not a pleasant experience.

He said he felt humiliated and angry at the way he was treated.

"At that point I then realised why people suddenly explode, because I could of. But I walked out with tears," he said.

Mr Oaariki, who is in his late 50s, said it was upsetting to be treated like that when he had worked and paid his taxes for most of his working life.

"Every now and then when life kicks you in the stomach and you fall over and you're in a situation where you can't find employment, you hope to be able to get help.

"Somebody will work at the same job their whole life, and they are lucky.

"Some of the Work and Income staff treat it as if it is their own money. I know that they've got quotas to uphold per branch. But it feels like you are trying to borrow money off them, personally."

CORRECTION: This article originally stated that there had been a surge in assaults on WINZ staff and that 46 staff members had been attacked in a year. This was based on information released by WINZ. WINZ has since apologised to Radio NZ for supplying incorrect information. The incorrect figures have been removed  from the article, as have reactions to news of those figures.