ANALYSIS: Winston Peters' call for Mike Hosking's radio show to be "counted against National's electoral advertising" is far from the first time politicians have put the acid on the media for bias.

It was quite a broadside in the New Zealand Herald. The New Zealand First leader called broadcaster and newspaper columnist Hosking "a National Party stooge" whose "jowls are up the Prime Minister's cheeks".

If the economy is in trouble, Mr Peters reckoned, you wouldn't know it from Hosking's frequent editorials.

Hosking returned fire. Peters "was bored and needed a headline," he said.

And among the headlines was this one chosen by rival publishing group Fairfax Media: 'Had enough of Mike Hosking?' It went with this poll: 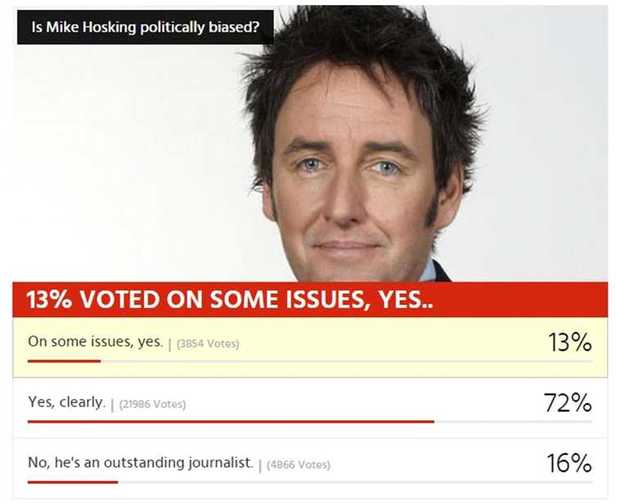 The article pointed out the extraordinary exposure Hosking's opinions were getting from three major media outlets.

"In the past month, broadcaster Mike Hosking has been given a platform to voice his views 70 times across his Newstalk ZB show, his NZ Herald column and the television show Seven Sharp. He's been at the centre of programmes on the air for about 65 hours".

But none of this was new. Critics have been trying to draw attention to Hosking's political coverage for some time, and noting, in the words of one, he "barely met a government policy" he didn't like.

In 2013, Hosking raised eyebrows by MCing the prime minister's state of the nation speech, saying of the National party, "We have bright prospects for the future, so long as you keep them in Government".

He is not the only one who feels that way. Mediaworks breakfast show presenter Paul Henry once stood as a candidate for National, and, ahead of the last election, pointedly told then Labour leader David Cunliffe he couldn't expect objectivity from him.

At the time though, that was over-shadowed by a row over pro-Labour campaigning at TVNZ

Bias in the eye of the beholder?

Such cases of outright political party support are rare, but the media are increasingly being challenged on bias as airing of opinions becomes more common.

The left/right leanings of guests on Radio New Zealand National's afternoon panel have been scrutinised, and these days the public broadcaster's website also hosts columns from its own correspondents as well as guests.

But ideological scrutiny of Radio New Zealand (RNZ) is nothing new.

During the 2005 election campaign, National MP Gerry Brownlee complained about "red radio" and mentioned then Nine to Noon host Linda Clark. When Clark then raised the electioneering tactics of the Exclusive Brethren church, Mr Brownlee said: "This is 'Radio Labour' at its best".

An irritated Clark replied: "That is a desperate lie".

In addition to Hosking on Breakfast, hosts Leighton Smith and Larry Williams also back the government far more often than not - and they've been doing that for many years.

In 2009, ZB manager Bill Francis told Mediawatch: "Talk radio works best with a fairly conservative approach from the hosts. It is true the balance swings to the conservative side."

But in spite of that, Francis said, Labour had just won three elections and the listeners knew they could take or leave the views of the hosts.

Received wisdom down the years has held that the western media are - broadly speaking - staffed by people who lean to the left.

The first survey that asked New Zealand journalists about their political views found most who took part identified the news media in general - and themselves in particular - in that way too. 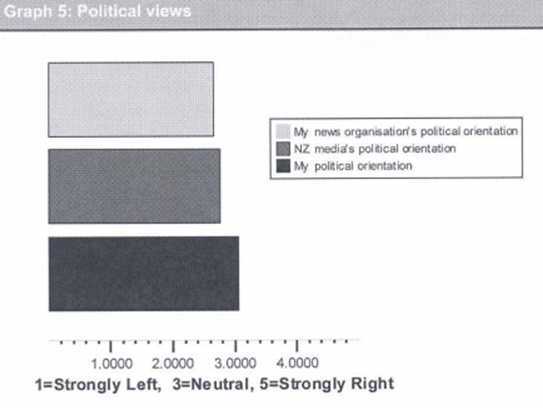 It was up to the journalists to decide what "left" and "right" actually meant, so it was only a snapshot. But the findings have been repeated in subsequent surveys.

But, as Sunday Star-Times writer Finlay MacDonald pointed out at the time, more right-wing journalists might only be attracted to working in the media if right-wing salaries were on offer.

Incidentally, Hosking's employers at NZME, which owns Newstalk ZB, may be delighted with Mr Peters' withering scorn right now. It has generated extra exposure for his radio show during the crucial period in which the commercial radio industry surveys the audience to set advertising rates for the future.