New Zealanders in the gruelling 1000 kilometre Mongol Derby have been beaten on the by riders from South Africa and France. 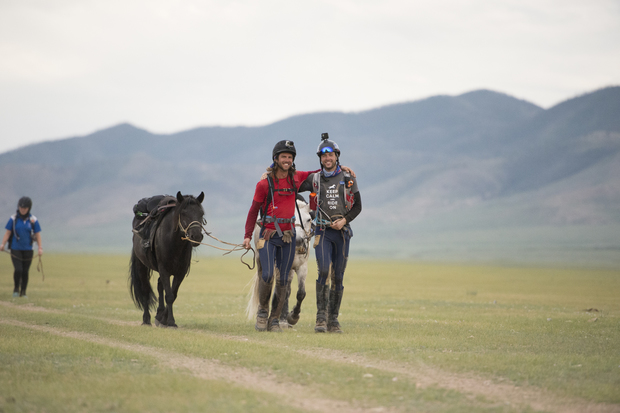 Ben Wilks and Maxim van Lierde on Day 6 of the race. Photo: SUPPLIED

The race was won overnight on Tuesday, on the seventh day, by Byeronie Epstein from South Africa. She was closely followed by Elise Potrinal from France.

In the lead group are New Zealanders Maxim Van Lierde from Taranaki, Ben Wilks from Katikati and Michele Tanaka from the United States.

These three are awaiting vet checks to find out where they placed.

According to "The Adventurist" website, Byeronie Epstein fell off her horse on Tuesday morning, and the New Zealanders and Ms Tanaka stopped to help her.

Braden Cameron from Wellington is set to come in next, followed by Patrick Sells from Waikato.

Forty riders are taking part in the 1000-kilometre race through the Mongolian steppe, and have 10 days to complete it.

Derby chief, Katy Willings said from Mongolia that the leading New Zealand pair have "made mincemeat of the world's longest horse race and thoroughly enjoyed themselves."

"They've been the nice guys of the trip," Ms Willings told Morning Report. "They've led for an awful lot of the race."

The route existed until 1949 when it was shut down by the Soviet Union.

"We reinstate it for 10 days every summer," Willings said.

Riders change horse every 40km and navigate independently between the horse stations. At night they live with herders or camp under the stars.

To stand a chance of finishing riders must balance survival skills and horsemanship, and to be able to win an extra level of determination and no small amount of luck is required.

Willings said the New Zealanders had coped well. "They've been in a fantastically functional and fun team."

The derby was first run in 2009. It's the third time a South African rider has won the race; so far, no New Zealander has ever won the Derby.