Neighbours living near the scene of a fatal rubbish truck crash in Auckland say the truck appears to have missed a sharp corner on the street. 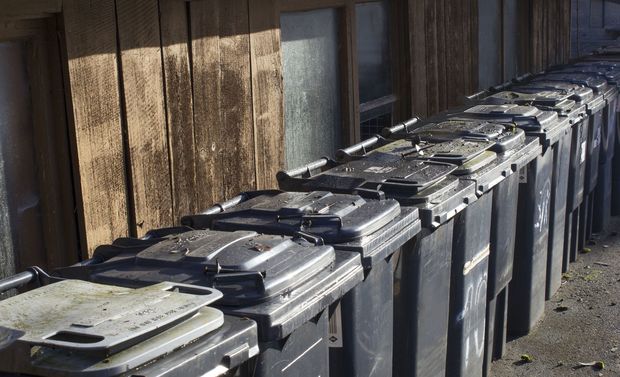 Emergency services were called to Hebe Place in Birkenhead at about 11am today after the truck overturned, killing a worker and trapping the driver.

Roy McKone, who lives on Hebe Place, said he went to investigate after hearing a loud crash and a voice crying out for help.

The truck had gone straight over a corner at the start of Hebe Place and was on its side about 20 metres down a bank, Mr McKone said.

"In the meantime, a neighbour had got down there before me and she was trying to hold the door of the truck open and perhaps comfort the driver, who was calling out, 'Where's the girl? Where's the girl?'

"We speculated, well, maybe there was a girl there and she was under the truck," he said.

Neither the police nor Auckland Council, which had contracted the truck to collect rubbish, was able to confirm if the person who died was male or female.

The police said the trapped man had been freed and was in hospital with moderate injuries.

The crash at happened at a very sharp corner where Kauri Road turned into Hebe Place, Mr McKone said.

"You have to slow right the way down to get round - it's not something you can take at any speed."

He did not want to speculate about why the truck had not managed to take the corner.

The truck was still down the bank and the road was still closed, he said.

"There is a vehicle of some sort - a crane - down there trying to haul the truck up, which is going to be quite a challenge... It's very muddy and steep."

Another neighbour, Graham Lundie, said it looked like the truck had gone straight over the corner.

It could be that the truck's brakes had failed, Mr Lundie said.

Auckland Council manager John Dragicevich said there was a diesel spill at the crash scene and council staff were working with the Fire Service to clean it up.

The council extended its condolences and support to the family of the person who died and to the injured driver, Mr Dragicevich said.

WorkSafe said it had been notified of the crash.