A range of lobby groups have joined forces today in a legal bid to have documents relating to the Trans Pacific Partnership (TPP) released. 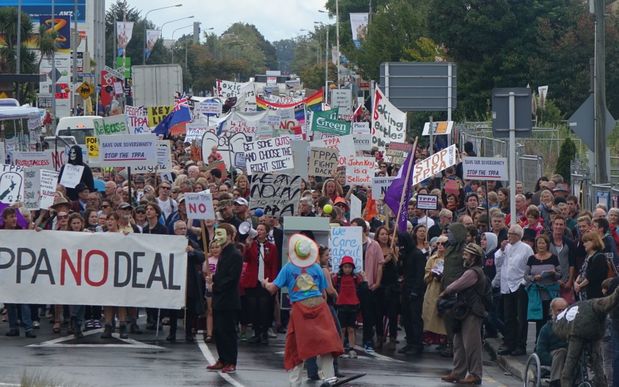 A protest against the TPP in Christchurch earlier this year. Photo: RNZ / Patrick Phelps

Consumer New Zealand, Greenpeace and the New Zealand Nurses Organisation are among those bringing the case.

Earlier this year, Auckland law professor Jane Kelsey made an Official Information Act (OIA) request for documents relating to the TPP, but that was refused by Trade Minister Tim Groser.

Papers filed in the High Court in Wellington today seek an urgent judicial review of Mr Groser's decision not to release the documents.

A report from the Chief Ombudsman - released last Wednesday - upheld the minister's decision.

But the TPP opponents say there is an important public interest in the TPP information being made publicly available, as doing so will help inform people about the position the Government had taken on behalf of New Zealanders before the negotiations were concluded.

They said the agreement could have far-reaching consequences for New Zealanders and releasing the documents would also help people better understand the issues under negotiation.