The authorities knew exactly where Tony Douglas Robertson was every minute of every day - but they could not stop him abducting, raping and murdering mother-of-three Blessie Gotingco.

Today the Supreme Court rejected his application for continued name suppression, meaning Robertson can be named for the first time.

The 28-year-old had been out of prison for just six months when he murdered Mrs Gotingco. He had just served eight years in prison for crimes including abducting a child and sexually abusing her.

His release conditions included a curfew, drug and alcohol treatment and electronic monitoring.

The Department of Corrections was so worried about the chances of him re-offending on release they applied for extended supervision orders for the maximum 10 years.

The order was due to come into force in June, once his release conditions ended.

But before that happened, Robertson had raped and murdered Mrs Gotingco. 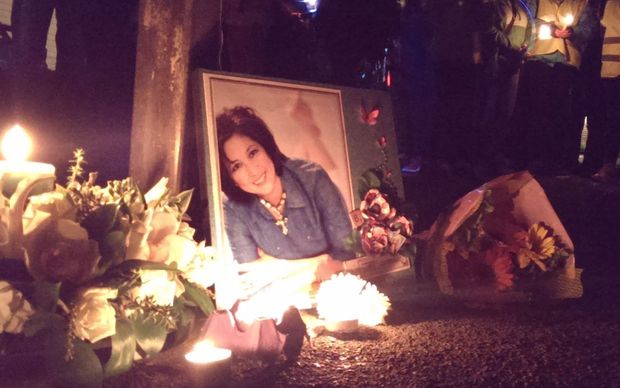 The Crown said on the night of 24 May last year, he purposefully drove his BMW on to the footpath and ran down Blessie Gotingco as she walked home from the bus stop after work.

She was thrown over the bonnet and suffered two broken bones to her left leg but was still alive. Robertson bundled her into the backseat before driving back to his house where he raped, strangled and stabbed her.

The next morning, just minutes after his curfew ended, Robertson dumped the body of Mrs Gotingco in bush behind the Eskdale cemetery.

Every movement was captured by the GPS bracelet, information that eventually led police directly to the body of Mrs Gotingco.

Robertson quickly became a suspect, thanks to a suspicion held by a police officer who had investigated him before.

Detective Chris Cooper knew Robertson was being monitored and that he lived in the area where Mrs Gotingco went missing. He contacted the Department of Corrections to get the data which put Robertson on Salisbury Rd at the time Mrs Gotingco was last seen, and then at the Eskdale cemetery the morning after.

When police followed his movements into bush behind the tombstones, they discovered Mrs Gotingco's body, wrapped in a Briscoes bedsheet. Later, forensic experts were able to conclude she had been raped and strangled before having her throat cut.

Inside Robertson's house police found trails of blood, bloodied surfaces in his car and garage and even a knife in his kitchen drawer with blood on it. DNA testing matched it to Mrs Gotingco.

Likewise, semen found inside Mrs Gotingco's body was a match to Robertson.

At his trial he accused police of planting evidence. It can be assumed his fantastical explanation was dismissed by the jury. 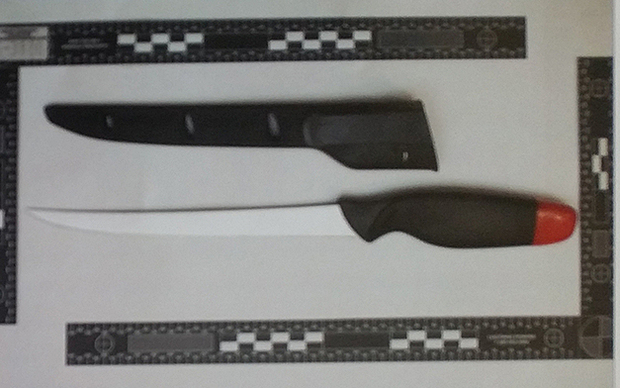 A knife found in Tony Robertson's drawer, which had Mrs Gotingco's DNA on it. Photo: RNZ / Edward Gay

The High Court jury at Robertson's trial was never told of his disturbing background, with a criminal history which began when he was just 16 years old.

He has amassed convictions for assault, aggravated robbery, possessing an offensive weapon and threatening to kill.

And in 2005 he began sexually offending against children. A jury found him guilty of trying to entice three children into his car by telling them their mother was at a nearby petrol station and that she had a present for them. One of the children sounded the alarm and Robertson drove off.

The next day he abducted a five-year-old girl, telling her that her mother had a present for her and was at a nearby beach.

Robertson drove her out of town, and she was found in his car, upset and crying. He was convicted of abduction with intent to have sexual connection, robbery, attempted kidnapping and doing an indecent act.

The Crown was represented by Simon Bridges, who is now a National Party MP and the Minister of Transport. He asked the court for preventive detention, an unlimited sentence that would have forced Robertson to prove he was no longer a threat to the community before being released. Instead, he was sentenced to eight years in prison. 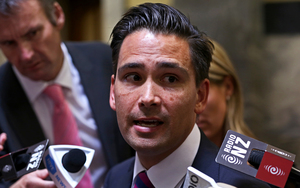 While inside, Robertson sought no help for his sexual tendencies and showed no empathy for his victims, continuing to protest his innocence.

A psychologist's report shortly before his release from prison in 2013 found Robertson had a high risk of re-offending. It concluded he was hostile towards women, had a sense of social rejection, a lack of concern for others, and "deviant sexual preferences".

But Robertson was still in denial, claiming he had been framed by police - a claim he has continued to espouse. He has twice lost his temper at court hearings which have ended with him swearing at judges.

Both the Court of Appeal and the Supreme Court upheld his conviction on the child sex offences, citing an extremely strong Crown case.

In February last year, just three months before he murdered Mrs Gotingco, Robertson was told he would be watched by authorities for at least the next 10 years of his life.

The Corrections Department application for an extended supervision order was approved and included a curfew and electronic monitoring.

In granting the application, Justice Wylie was almost able to predict the future. He found "it is likely that [Robertson] will commit an indecency".

"Any re-offending is likely to be of a serious sexual nature, causing significant harm to vulnerable individuals," he said.

The only area where the judge was wrong was the age of the victim. Based on Robertson's previous appalling history, Justice Wylie believed Robertson's future victims would be children.

Instead, it was the 163cm tall, 60kg Blessie Gotingco, on her way home from work in the dark, just metres from her front door. 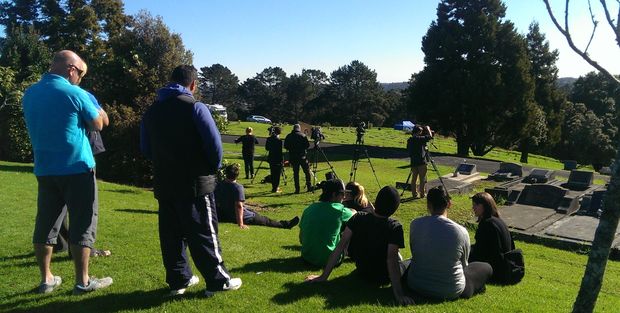 Friends of Blessie Gotingco at the cemetery where her body was found. Photo: RNZ / Murielle Baker

Robertson told the jury it was all an accident, that he mistakenly crashed into Mrs Gotingco as she crossed the street.

He even had an explanation for stabbing Mrs Gotingco. Robertson told the jury that he knew he was being monitored by GPS and that police would trace him to Salisbury Rd at the time Mrs Gotingco was hit by a car. They would want to look at his BMW and when they found the smashed windscreen and damage to the bonnet, they would know who was responsible, he said.

He claimed he stabbed Mrs Gotingco to make it look like a random attack.

There was also the fact Robertson never checked for signs of life and did not call an ambulance.

The Crown said Robertson did the exact opposite. He ran Mrs Gotingco down in the street, bundled her into his car and drove her to his garage.

Neighbours reported hearing loud music coming from Robertson's apartment that night. The Crown said that was to drown any other noise while Robertson, raped, strangled and stabbed Mrs Gotingco.

In the end, the jury took just two hours to return their verdicts of guilty.