Belinda McCammon spent 10 hours aboard NASA's Stratospheric Observatory for Infrared Astronomy (SOFIA) on Friday night. The world's largest airborne observatory operates from the back of a converted jumbo jet. 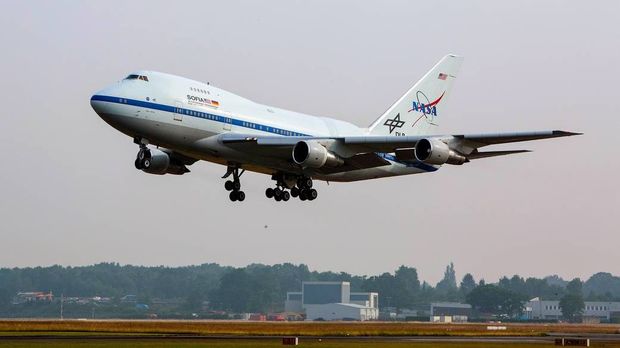 The plane is usually based at NASA's Armstrong Flight Research Center in Palmdale, California. Photo: NASA

SOFIA is a joint venture between NASA, which runs the programme, and the DLR (German Aerospace Centre) which built the €80 million telescope.

Usually based at NASA's Armstrong Flight Research Center in Palmdale, California, it is the aircraft's second season in Christchurch, and it will have conducted 17 missions by the time the season finishes on 24 July.

So what does a flying observatory do and what can it see?

There's been a high degree of interest in this flight by lots of people at work (mainly the boys) and even my family (my mother tracked the flight on her tablet at home in Queenstown), and probably not unlike Neil Armstrong returning from the moon, I've fielded a number of questions about what it was like and what I saw.

Did you float in the aircraft?

No, I did not, though at the highest point of the flight - 43,000 feet - we did fly higher than most commercial airlines. During takeoff and landing you're pretty securely strapped in though, definitely more than a seatbelt, and the majority of people on board are sitting with their backs to the pilot, so you're facing the earth. We didn't have a lot of turbulence but when that seatbelt sign flashed on, we knew we had to get back to our seats pronto.

After watching the film Apollo 13 on Saturday night, I can say with authority, no. The SOFIA is a Boeing 747, stripped of pretty much anything that is required in a commercial aircraft. It is decked out instead with scanners, desks and other equipment, including a telescope with a diameter of 2.5 metres. There were apparently 20 or so of these particular aircraft made years ago and only seven or eight are still in operation, including a couple used to fly high rollers into Las Vegas from China. 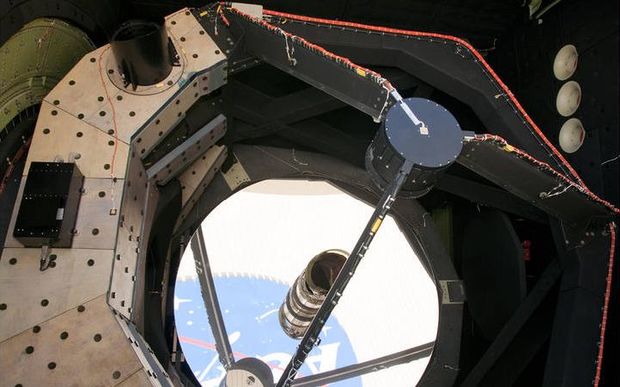 SOFIA has a telescope with a diameter of 2.5 metres. Photo: NASA

Do you have to be a NASA trained astronaut to be on board?

Those on board (there were about 20 on this flight) range from scientists, engineers and flight crew to observers like me. Having once met Buzz Aldrin, at the Wanaka airshow a few years ago, I felt pretty confident I could hold my own with such an esteemed group. As it turned out, I was more the IQ-equivalent of Penny from The Big Bang Theory.

Are the scientists trying to find E.T.?

No one was phoning home on the flight I was on. The crew have "targets'', which are usually planets, stars or comets that they are on the flight to find and collect data from. Infrared light penetrates through the dust and gas in the universe so it enables the scientists to see what is going on in the background, things they can't see with a visible eye telescope. SOFIA costs a lot of money to run and so even if they were to spot alien life forms out there, it would be rare for the crew to deviate from the programme. Time is money and it's all about results.

There is no space-themed inflight menu - it is home made. Everyone on board is responsible for bringing their own food for the flight and there are rules, lots of rules. Nothing that can spill or get stuck in a computer port is allowed on board. Bottled water, hot water and coffee and a microwave oven are provided. If you use the fridge to store your food you'd better make sure you don't take someone else's snack, otherwise they'll eject you.

What's it like looking at the stars so close?

Pretty much the same as when you're on the earth. Most of my star watching was on a screen in front of me, which showed the images from the telescope. I could not see the craters on the moon. At one point I did spend 10 minutes on my knees with a jacket over my head blocking out the cabin light, looking out at what I was assured was the Southern Lights. It just looked like clouds to me but I was swayed after seeing the pictures others took on the flight and looking through night goggles. It was pretty impressive.

Did you need any training before you went on board?

There were so many safety briefings it was enough to make Sir Bob Jones eject himself. It became pretty apparent that the degree of skill needed to work the survival gear alone meant that if something had gone wrong, I would not have stood a chance. Luckily, as was pointed out, if the worst had happened the crew certainly would not have been turning to me in order to get them out of any predicaments. Best part of being on this aircraft? I didn't have to sit through one Hobbit safety video.

If the cavity of the plane is open, it must get cold?

It's not that cold. It's definitely cold outside, -35 degrees Celcius for most of the flight, but inside it is actually fine. It's all about layers. I only needed my gloves when we landed back in Christchurch at 4am. That was cold.

Were you excited about being on the flight?

Being a journalist means you get great opportunities to do things that many others can't do, so it's always a privilege to be able to take part in something like this, it's definitely once in a lifetime. Was I as excited as one woman on the flight who said this was the best thing that had ever happened to her in her life? No. (That would be the Highlanders becoming Super Rugby Champions on Saturday night!). It was great meeting and talking with the crew, they were generous with their time and made a real effort to explain their work in Janet and John-like simplicity while manning a multi-million dollar aircraft. 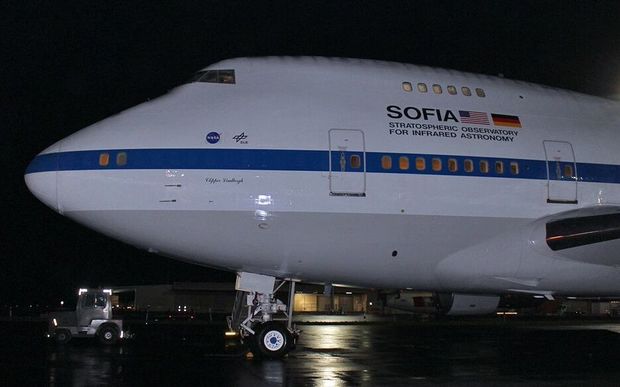