Cabinet is meeting this morning to assess the response needed after the severe flooding in the Whanganui, Rangitikei and Manawatu districts. 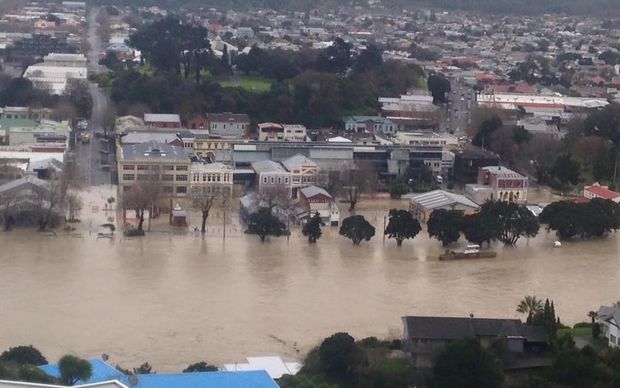 An image of Whanganui taken by a resident. Photo: Diana Fowler

The latest storm is the fourth major weather event in the last month, following extensive flooding in Kapiti, Wellington and Dunedin.

Though there was no official advice about any link with climate change and the recent events, he said, global warming was expected to cause more volatile weather and the Government needed to act to ensure the country's infrastructure could cope.

"The rise in global temperature is likely to have a more dramatic impact on weather patterns, and so I think there's a few things we'll need to do there.

"Some are in terms of mitigating that - making sure our infrastructure can cope better."

Mr Key said the Government was also working to meet its emissions targets and big global emitters should to do their bit as well.

'It's going to take a while'

Civil Defence Minister Nikki Kaye said the priority was to help people affected by flooding in the region and hardship grants would be available.

Ms Kaye told Morning Report discussions on whether infrastructure was up to the task in the region would be held once things were under control.

Civil Defence national controller Shane Bayley says it will be some time before the true damage to infrastructure and homes in the Whanganui region was understood.

Mr Bayley said it was the largest flood event that most people in the district would remember and there was provision for government help to local communities.

"We just need to get a really good feel for what the level of impact is so that the right level of support goes to the communities that need it." he said.

The clean up in the Whanganui would only happen as the floodwaters recede and the extent of the damage is known. "It's going to take quite a while."

No flood prevention infrastructure could survive all emergencies, he said.

"There is a limit to how much a system can be designed to cope with," he said. "Stop banks are built to a certain height - if the river gets higher it's going to flood. If you want to stop it flooding you'd have to stop it raining, quite frankly."