A Northland conservation group has asked the Auditor-General to conduct a formal inquiry into the way the Ministry for Primary Industries has been regulating the export of swamp kauri. 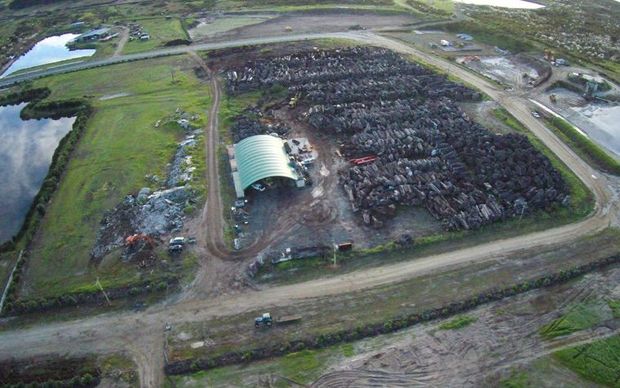 Primary Industries Minister Nathan Guy conceded in Parliament yesterday there could be room for improvement in MPI's work.

But the Northland Environmental Protection Society said that does not go far enough.

President of the society Fiona Furrell said export records obtained under the Official Information Act show MPI had been allowing the export of large slabs of swamp kauri, often labelled as table tops.

Under the Forests Act, there was provision for the export of some milled timber from swamp kauri, but it had to be from stump logs - a portion of trunk still attached to the root section. The rules say the stump log can be no longer than the diameter of the stump at ground level.

Ms Furrell said export records suggested MPI had not been enforcing those rules. She said officials had allowed the export of 4 metre or 5 metre kauri slabs which could not be classed as stump material.

"One slab that turned up in Italy was 10 metres long," she said.

"For that to be legally exported under the Act, the tree it came from would have had to be 10 metres in diameter, and even though kauri can be pretty big, that is just absurd."

The Ministry's Director of Forestry and Land Management, Aoife Martin, told Morning Report that while logs were being advertised on overseas websites, she was certain they were still in New Zealand and would not be exported.

She said one change she would make is to work with companies to clear up confusing advertising on foreign sites.

She asked why, if MPI took its responsibilities seriously, information required by law was missing from 80 percent of intention-to-export notices processed by MPI officials in 2013.

Mr Guy said that in the past 18 months, 80 consignments of swamp kauri had been physically inspected, and six were not approved.

"Yesterday I requested further advice from MPI on improvements that can be made in managing the milling and exporting of swamp kauri," he said. 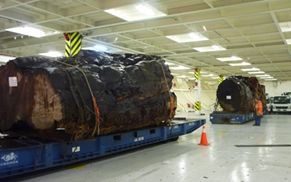 The big logs shipped to Shanghai from Auckland, which MPI says it has no records for. Photo: Supplied

Fiona Furrell said that was the first time the Government had conceded all might not be well in the regulation of the swamp kauri industry, and it was a good start.

But she said the extent of the failures demanded an independent investigation and the Auditor-General was the right person to do that, not the officials involved.

Northland MP Winston Peters also castigated the MPI's handling of an export trade he said should be stopped.

Ms Furrell is also asking how MPI would validate the milling of swamp kauri now being stockpiled in the North.

The group had sent the Auditor-General photos of logs stored at depots like Kauri Ruakaka's near Whangarei.

Ms Furrell said swamp kauri must show a record of its origins, but the labels on some logs had faded and the information was unreadable.

Meanwhile a major iwi in the Far North has declared a moratorium on swamp kauri mining on its tribal land.

Te Rarawa's chief, Haami Piripi, said the iwi had turned down lucrative offers for the resource.

"We can recognise there's a bit of a gold rush going on," he said.

"But we think we could be doing a lot more to optimise its extraction, and ecological rejuvenation [for the mined areas] needs to be thought about some more.

"And the working of the logs - this timber is so intensely ancient and valuable that surely we can do better than export the raw resource. There must be things we can do as potential artisans in this country to optimise its use and perhaps not fritter it away as quickly as appears to be happening now."

“On Tuesday, June 16 we broadcast a story (and subsequently published it on our website) about the contention of environmentalists in Northland that the Ministry for Primary Industries was failing to ensure that swamp kauri exports complied with the requirements of the Forests Act 1949.

Radio New Zealand unreservedly apologises to Oravida and Mr Wong-Tung for its error and any suggestion they have acted unlawfully.”