The country's biggest dairy company, Fonterra, has hit its farmer suppliers with a double whammy.

It has lowered its forecast milk payout for the current season by a further 10 cents per kilo of milk solids, bringing it down to $4.40 a kilo, with a dividend of 20 to 30 cents per share on top of that.

It has also announced an opening milk price for the new season, starting in June, of $5.25 a kilo, well below the current season's opening price of $7.

The latest drop in this season's payout forecast comes only a month after it reduced the price from $4.70 to $4.50, driven by the continuing decline in international dairy prices.

If the latest price adjustment turns out to be the final figure for the season, it means farmers supplying Fonterra will be getting not much more than half of what they got in the 2013/14 season, when Fonterra paid out a record $8.40 a kilo for its milk.

The co-operative will confirm the final price for the 2014/15 season later this year. 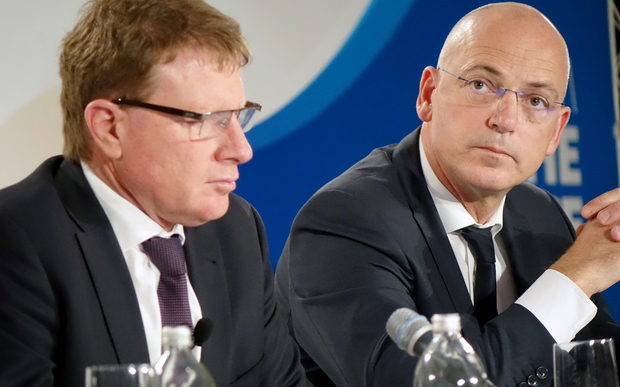 Fonterra chairman John Wilson said the revised forecast reflected the reality that global commodity prices had not increased as expected.

"World markets are over-supplied with dairy commodities after farmers globally increased production in response to the very good prices paid 12-18 months ago," he said in a statement announcing the changes this morning.

"This supply imbalance has heightened due to continuing good growing conditions in most dairy producing regions."

He said the opening $5.25 milk price forecast for the next year was based on Fonterra's best view of long-term global dairy supply and demand.

"We can expect prices to recover going forward, and to see a rebalancing of supply and demand over the season," he said.

"However it is more difficult this early in the season to determine exactly when this recovery will lead to a sustained price improvement."

"The real concern for me is key importing regions like China, Russia, Middle East, Africa - when are they really back into the markets?

"So it's more of an amount issue than a supply issue in my opinion."

He said he was still confident about the long term prospects for the dairy sector.

Federated Farmers national dairy chair Andrew Hoggard, who is a Fonterra supplier in Manawatu, said the further drop in the current season's payout would come as a surprise for most farmers, although the opening forecast for next season was in line with most people's expectations.

He said it meant the monthly advance payments to farmers for the new season would start at about $3.60 a kilo and wouldn't top $4 until February next year.

He said that was going to mean a second successive season of extremely tight cash flows for farmers.

Some were already running at a loss at this season and would have to take on extra short-term borrowing to get them through the next year.

Mr Henderson who farms at Oxford says spouses and children will end up in the dairy sheds as farmers look to soften the impact of the drop.

"The cheapest labour you can find is generally family and so it could affect the employment of farm staff around the country with farmers perhaps delaying recruiting staff until later in the spring to save on cost or later in the winter."