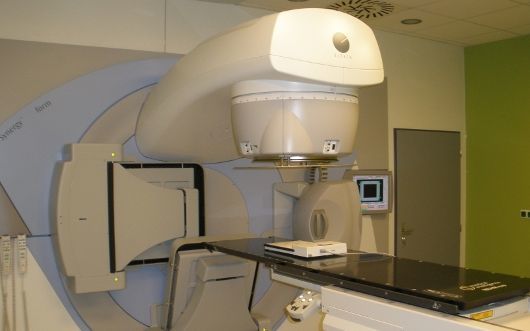 A LINAC machine, which delivers doses of radiation to people with cancer. Photo: Wikicommons

The staff want more wages, but district health boards say the pay claim is not sensible.

The action involves 65 workers who provide radiation treatment to people with cancer.

They are refusing to do overtime at Canterbury, Southern and Auckland DHBs, while at MidCentral they will cut back on using some of the technology.

The specialists are members of the APEX union, represented by David Munro.

"The DHBs are the target here." said Mr Munro. "We want the DHBs to front up to the fact that these people need to be paid more to retain them. We don't want to harm patients' interests."

"There may be some inconvenience for patients but there won't be any clinical consequences. The protocols in the health sector ensure that life and limb cannot be compromised by strike action and the physicists are committed to that as anybody else."

The APEX union argued that, compared to the $16 billion health budget, it was not demanding a huge sums of money from the hospitals.

It said the cost of the wage increase for its 65 members would come to $450,000 in the first of a three-year wage increase campaign.

A spokesperson for the DHBs released a statement which said: "Despite 4 months of negotiations, including mediation, the union is still hanging on to a 20 to 45 per cent pay claims on the basis that some people in Australia earn higher pay than Medical Physicists in New Zealand.

"The union is arguing that this is a workforce in crisis despite there only being two vacancies nationally and despite DHBs growing the workforce, increasing training positions, and expanding services while meeting and exceeding targets for cancer treatment on an annual basis."

The DHBs said they would contact patients if treatment was affected by the industrial action.

The Cancer Society's chief executive Claire Austin was looking at the dispute from both sides.

"We also note the importance of retaining and building a stronger cancer care workforce. We hope that a resolution is found between the parties soon so that services are not disrupted so that cancer patients are faced with any additional unnecessary distress."

The action at Canterbury, Southern and Auckland DHBs, while at MidCentral is due to end this weekend.

After that, there will be an overtime ban and a refusal to work in the evenings or through the night at Capital and Coast and Waikato DHBs for seven days.

But action could escalate to a strike in early July if a resolution is not reached.