Prince Harry has paid tribute to emergency service and disaster response teams at a reception tonight, as well as New Zealand's skill at rugby. 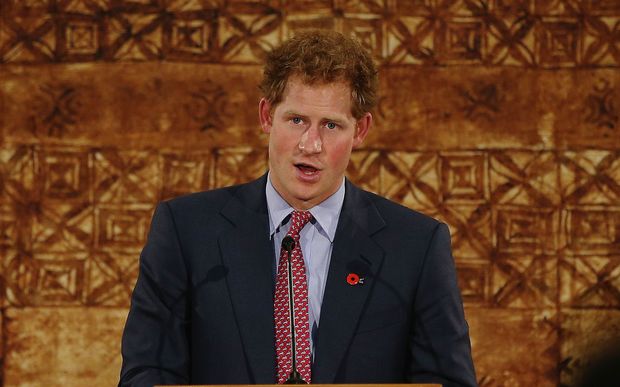 Speaking at a reception for the emergency services, he said he had wondered how a country so small could be so good at rugby.

"But don't worry, I'm not here to spy on you. I come in peace, despite what some may think."

The Prince also spoke about Christchurch, saying his brother William had told him many "heartwrenching stories" about the people of Christchurch.

He said the response, including that of the Volunteer Student Army, was "characteristically Kiwi."

He paid tribute to the work of emergency services and disaster response experts, saying they came at a time of great need.

"There is surely nothing more challenging for a community, than to have normal life replaced by the horror of a natural disaster."

He said Prince William had taken on air ambulance work and he was aware of training that went into the role.

"So I would like to say thank you, and I especially want to thank your families, too."

He also thanked those working in Nepal. "Nepal is a nation New Zealand has enjoyed close links with since Sir Edmond Hillary conquered Everest along with Sherpa Tensing Norgay."

He promised he would return to New Zealand., He had been told a lot about New Zealanders and could not believe it had taken him so long to visit, having been told many stories by his brother William and Catherine as well as Prince Charles.

The prince's entry to a reception for emergency and disaster relief workers was delayed after he met search and rescue dog Gemma, waiting with her handler outside.

"I've met so many dogs on this visit," Harry said.

Inside, the entry of the Prince and Prime Minister John Key was announced, but a few minutes' later there was an apology when the MC realised they were still talking to the dog.

They finally made it inside, along with Gemma.

Governor General Sir Jerry Mateparae said, "Like other New Zealanders, Janine and I hope you've enjoyed your first visit as much as we've enjoying having you."

Sir Jerry said he had made a great impression on many New Zealanders for his haka, his words and his willingness to talk to people. He spoke of a veteran stoked the Prince crossed the floor to talk to him and a Girl Scout overwhelmed by her meeting.

"Afterwards, she went around telling people he touched my badge."

Sir Jerry then paid tribute to the workers for emergency services and disaster response teams. Those at the reception include the Coastguard, Landsar, the Navy, Fire Service, Unicef, and Habitat for Humanity.

Sir Jerry said Prince Harry had much in common with them, having "shown resolute commitment to helping others through his patronages and charities.