Property investors are warning the Reserve Bank's moves to cool the Auckland housing market won't have the impact it is hoping for. 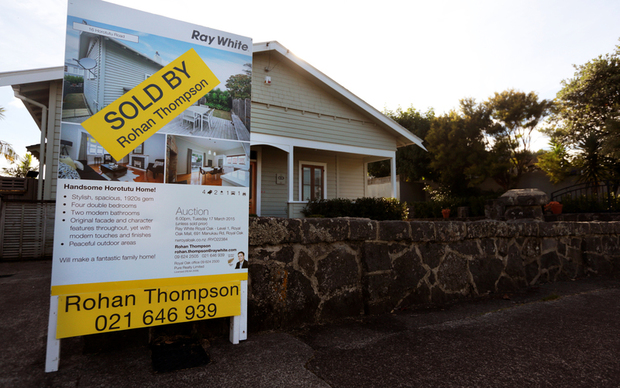 From October, investors will have to find a 30 percent deposit if they want a bank loan to buy a house in the Auckland Council area.

But investors and families said they were not convinced the tightened loan restrictions will work.

Adam Edgar and his family have looked at more than 150 houses in the past five months, and until last night, were two weeks away from becoming homeless.

At a tearful and clearly stressful auction last night, the family finally put in a winning bid for a home in Totara Vale, on the North Shore.

Mr Edgar said his experience of overseas buyers meant he thought the new deposit rates for investors would not work.

"It's too late... From what I have experienced, it's simply not going to affect the people who are buying houses out there," he said.

"They're coming in here cashed up, they're not borrowing from New Zealand banks, so it's irrelevant."

Deposit not hard to find

New Zealand Property Investor magazine publisher Philip Macalister agreed, saying although it might push some investors outwards to perhaps Rotorua or Tauranga, a 30 percent deposit would not be hard to find for those with already-large portfolios.

The Reserve Bank said it hoped the restrictions will cut house prices rises by 2 to 4 percent from the level they would otherwise be.

Property investor David Whitburn owns homes across Auckland and said some investors would struggle but strong price rises would continue.

Auckland Chamber of Commerce chief executive Michael Barnett said the market's problem would not be improved unless the issue of supply was dealt with.

Mr Barnett said nothing the Reserve Bank could do would have an impact on the Auckland housing market, and described the latest measures as a bandaid.

Finance Minister Bill English said further, faster supply of houses in Auckland was what was needed to combat the market's unsustainable price rises.

He told Morning Report supply was still the key to suppressing double-digit inflation in the Auckland housing market.

"What we can do, though, is lean on those levers which we do have," he said.

"In this case, the biggest single lever is the decision making of Auckland Council about the supply of housing and infrastructure, and that is why we are working with them to give them better tools to make faster decisions to get more houses."