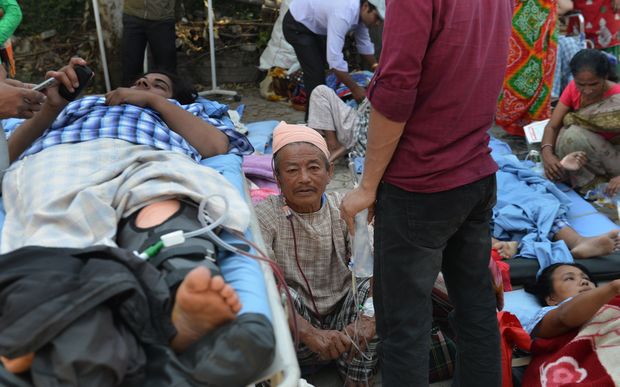 Bhola Pradhan, who is a member of the Nepal New Zealand Friendship Society, said he feared for the safety of some of his family living in Nepal's capital, Kathmandu.

He said he was able to contact most of his family living there, but he was becoming increasingly worried about those he had not heard from.

"I was shocked when I first heard there was another one, so I called my brother and his family. They were okay but very, very traumatized from what happened," he said.

Mr Pradhan said his family had just moved back into their home, but, because of this latest quake, were forced to live in a tent again.

"It's really bad, because they were just trying to recover from the last one and now this has happened," he said.

Mr Pradhan said he was worried about the possibility of further aftershocks.

"We're in Christchurch, and while we had many aftershocks here, our house was very safe, so we didn't have to worry about it falling on us."

"But, in Nepal, you cannot trust the houses, because they are not built to withstand the force."

'Not the last big tremor'

"There will be large aftershocks from this, and from the event that happened a few weeks ago, but will we see another [one of this size]? I don't know, no one knows," he said.

Mr Fry said there was little doubt the latest earthquake was an aftershock to last month's one.

He said given the magnitude of the first earthquake, it was not unusual to see aftershocks of such a size strike other areas of the country.

Kevin Furlong, a professor at Pennsylvania State University, agreed with Mr Fry, and said that last night's quake would not be the last big tremor.

He said it was almost certainly triggered by the stress changes caused by the first major quake, but was also creating its own aftershocks.

The US Geological Survey had predicted a 1-in-200 chance of such a big event occurring this week.

But Professor Furlong said the 7.8 magnitude initial quake on April the 25th may mean aftershocks just keep on coming.

Since last night, New Zealanders have donated a combined total of $60,000 for Nepal on the New Zealand Red Cross and Givealittle websites.

This follows a rapid response to last month's earthquake, which saw more than $200,000 donated to the Red Cross within a night.

Both charities said it was the quickest, most generous response to an international disaster they had seen.

To date, close to $2 million has been raised for Nepal on the websites.

Hundreds of thousands of dollars has also been donated to other groups who have been fundraising for the cause.

The Government has contributed $2 million towards recovery efforts.

A Ministry of Foreign Affairs spokesperson said the Government is continuing to assess how it can assist further.