In the wake of the Livingstone case, a woman who was brutally abused by her ex-husband said her biggest concern is that police don't take into account cultural barriers and scars they can't see before they take a protection order breach seriously. 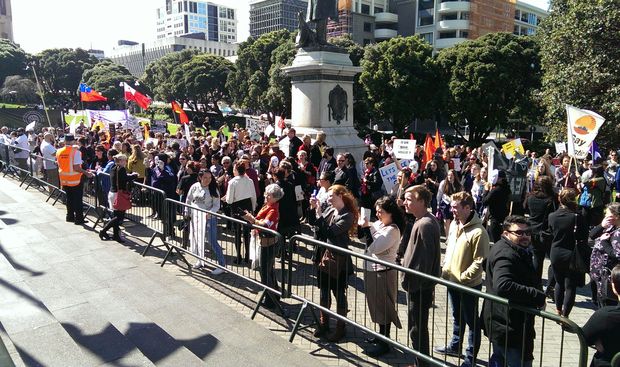 Crowds gather at Parliament to protest against domestic violence in September 2014. Photo: RNZ

The criticism comes after the police in Dunedin this week admitted failings in the way they dealt with Edward Livingstone and his family in the months before he shot dead his two children.

Livingstone breached the protection order laid against him by his former wife multiple times prior to and at the time of the killings in May last year.

Maria (not her real name) said she was under the impression that getting a protection order against her ex-husband would mean the abuse would finally stop.

When she moved to New Zealand from India in 2009, she became pregnant and that was when the assaults began, so she got a temporary protection order against him.

"He was ordered to do a non-violence programme by his court-approved provider, which he used to go because that was the condition of the protection order.

"Having said that, he would come home and he would brutally abuse me, because how dare I do make him do things like that ... how dare I went to the court where he has to do this, where someone tells him how to behave towards his wife."

She said she couldn't take it anymore, so she alerted the programme provider.

"I thought that would've been kept private but somehow he found out about it. I do not know if they told him or he figured it out, but basically that was the worst beating of my life that you could say.

"So the final assault took place on the 1st of April in 2010, and I managed to call the police the following day, because they hid the home phones from me that night so I couldn't ring anybody.

"But the next day, I got that window of opportunity where I did message my Victim Support worker and she rang the police and that's how I finally managed to leave home with my son. He [her ex-husband] got arrested and was put in prison for two and a half years."

Maria said while a protection order looks good on paper, it fails to take into account how difficult it can be for some women to call the police.

"I am concerned that the victims who do not have any physical marks, how are they being treated? Are they being taken seriously? Just because they don't have anything to show physically."

Regret for delay in seeking help

Susan Cochrane is another survivor of psychological and physical abuse, spanning more than two decades.

She is the former wife of Northland farmer and anti-Treaty of Waitangi activist, Alan Titford, who was jailed last year for 24 years over the horrific abuse of his family.

Looking back, she said she wished she had asked for help much sooner than she did.

"Well, I was scared that if I took off... what would my husband do to me... So I was too scared to actually go to the police, because I didn't think the police would actually do anything about it."

After years of feeling utterly powerless, it was a television advertisement that prompted her to cry out for help.

"It was that advert, Are You Okay, and it had a website, so I secretly went on to that website and contacted someone and they put me on to someone with Women's Refuge in Kaitaia.

"And then I was emailing them and they wanted to come out with the police straight away, but I just said when the time was right, I would let them know. It just sort of gave me the idea that, you know, you can get away."

Four months later, she got a protection order against Titford and left the farm with her children.

A spokesperson for the Shakti Women's Refuge, Sara Chin, said they have a lot of problems encouraging women to take a protection order out in the first place.

"The amount of work that our case workers have to do, in getting women to understand what getting a protection order actually means.

"Some of the issues that they would have against it is the lack of understanding and trust towards the New Zealand legal system.

"And lack of financial affordability or shame, or family pressure and the fear of intimidation from the abusers."

She said she's seen several cases where an offender has breached a protection order several times while on bail.

Ms Chin said it had reached a point where refuge workers could tell the kind of offender who was going to breach a protection order.

"The community in which we work with, there are quite clear indications as to who might be doing that, such as, you know, threat to kill."

She said in some cases people had specifically indicated to women that they did not care about New Zealand laws.

The police said a review is about to get underway into how efficiently and effectively they respond to family violence.