While debate continues to rage over the origins of the Anzac biscuit evidence has emerged that the "real" Anzac biscuit may have in fact been a humble gingernut. 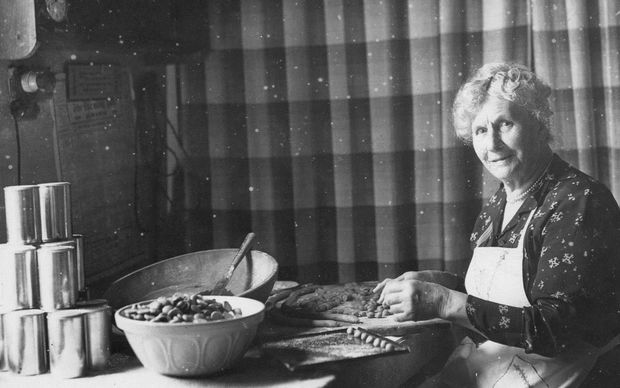 Helena Marion Barnard, otherwise known as the Gingernut Lady”, received a British Medal of Honour for her efforts baking four and a half tons of biscuits over the course of both world wars. Photo: Courtesy of Maryann Sanders

Researchers agree the rolled oats and golden syrup concoction that we know and love today is likely to have been too fragile to have survived the trip to the Dardanelles.

And now, an archivist at Nga Taonga Sound and Vision, Sarah Johnston, said she has found a recording which sheds light on the real homebaking efforts of New Zealand women during the First World War.

It particularly talks about those of a Taranaki woman, Helena Marion Barnard, who received the British Medal of Honour for her efforts in baking four and half tons of gingernuts over the two world wars.

Ms Johnston said she believed market-savvy home bakers attached the name Anzac to their oaty biscuits after the war to help promote sales at fundraising stalls.

Mrs Barnard's recipe, however, produced biscuits perfect for life in the trenches, she said.

"The gingernuts on the other hand, as we found when we baked them, are really hard.

I mean, if you bake them for the full length of time that Mrs Barnard suggests, you got this really hard little gingernut biscuit that is great if you dunk it.

"And we've actually got recordings of men talking about just putting a biscuit in their mouths and letting it dissolve."

Mrs Barnard lived in Eltham at the outbreak of the First World War and six of her boys served in that war. Three fought at Gallipoli, two of whom perished there.

In the 1965 interview, Mrs Barnard recounted making the biscuits for her boys when they went up expeditions on Mt Taranaki before the war.

"Of course they were the first ones I made when they went away. One of them wrote asking, 'Is it from the same recipe, mother'?

"Some of the boys writing from the warfront wrote to me asked, 'Would you be so kind and send the recipe to my mother'?"

Mrs Barnard packed the biscuits in tins carefully lined with newspaper clippings so the soldiers could keep up with the news.

And the gingernuts were tiny for good reason.

Helen Leach is Emeritus Professor of Anthropology and Archaeology at Otago University and has researched the history of the Anzac biscuit .

Dr Leach said Mrs Barnard's interview was the best evidence there was of biscuits being sent to the frontlines.

"The thing though is that her gingernuts would not have been called Anzac biscuits, because I suspect nothing called Anzac was going to the front at that time. I think it was a commemorative name that occurred after the war."

Dr Leach said the first recipe for Anzac biscuits as we know them today appear in the 8th edition of the St Andrew's Cookery Book, published in Dunedin in 1919.

According to Dr Leach the earliest known Australian recipe carrying the Anzac Biscuits name was published in 1921.

Maryanne Sanders is Mrs Barnard's great-grand-daughter and has travelled to New Plymouth for the Bringing it Home exhibition which features her great-grand-mother's story.

Anzac biscuit or not, Ms Sanders could not be prouder of her relative's war effort.

"She is remembered as an amazing woman. She did things not from a money point of view or an ego point of view, but from the kindness of her heart," she said.

"When I look back and think of a woman in her 80s applying herself again during the Second World War to making biscuits, I'm just amazed at her energy and resilience."

The story of Helena Barnard "the gingernut lady" forms part of the Bringing it Home: Taranaki and World War One exhibition at the Puke Ariki Museum which runs until 26 July.