In more than a decade, just one tenth of New Zealand's Light Armoured Vehicles have ever seen action, the Defence Force has revealed. 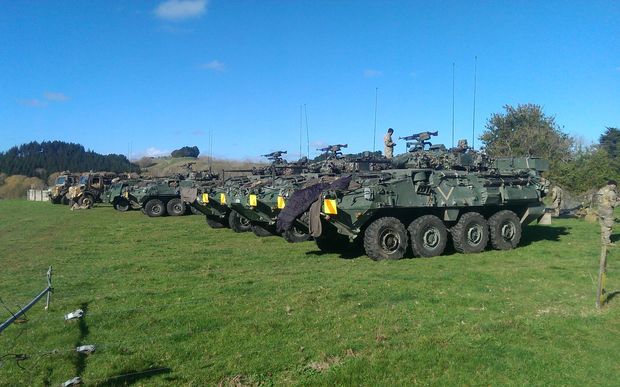 In 2001 the Government decided to purchase 105 Light Armoured Vehicles (LAVs) for $653 million.

But since their arrival in 2003, only a fraction of the LAVs have ever seen conflict.

The Defence Force said 11 had been deployed in Afghanistan while the rest had been used in exercises on both sides of the Tasman.

Labour's Defence spokesperson, Phil Goff said that, in hindsight, more LAVS were purchased than were needed.

He said the decision-making process for purchasing the LAVS was begun by the National government in the 1990s in response to the need to replace New Zealand's Vietnam-era M113 vehicles.

He said the latter were so slow that in the conflict in Bosnia, the New Zealand trucks were unable to keep up with the British vehicles they were supposed to be escorting.

"The army and the Treasury both advised the incoming Labour Government, on the basis of the work that had been done, that we should purchase 105 of the vehicles."

He said ministers would then be able to deploy a three-company battalion offshore for six months, while a similar battalion could remain training in New Zealand on the LAVs that were kept here.

He said the advice given in conflicts in Timor Leste, the Solomon Islands and Afghanistan was to not deploy LAVs, except in the later stages in Afghanistan when soldiers began to come under fire.

Minister of Defence Gerry Brownlee declined to comment. However,Max Bradford, defence minister in the National government at the time, said it had nothing to do with the expensive purchase and was wanting to buy only 35 LAVs.

He said the LAVs distorted defence spending for years. "Having committed all that amount of money we weren't in a position to consider what we ought to spend on the Navy and the Air Force, apart from other things that we might have got for the army."

Dr Smith said that New Zealand's current drive to go to Iraq is to support traditional allies, but what other countries are able to do is use air strikes rather than put people on the ground and New Zealand no longer has that choice.

"That's precisely the capability we haven't got and we haven't got it because the Labour Government, having spent all its money on LAVs, couldn't spend it on F16s.

"It's a dangerous world out there and we really need to take these things sensibly and start equipping our forces with what it might need if in fact we find ourselves in a serious security situation."

He said it could be good that the country has only ever deployed 11 vehicles. "Isn't that a good thing that we've only had to use them like that? ... Ideally you don't use them but if you do have to put the soldiers in harm's way, they need to be protected."

He said unless people were going to argue that soldiers did not need protection, then some spending was going to occur. "Ideally you're not going to need it because they're not used, but if you're going to need to use the military then they've got to have appropriate equipment."

He said the LAVs were fit for purpose. "They're very good equipment. They're better than the Australian equivalent. Australians also have LAVs but they are ones that have been Australianised and [are] not as effective."

Lessons to be learned - Mark

New Zealand First Defence spokesperson, Ron Mark, said there were lessons to be learned from the LAV purchase and their usage.

"Defence is something that will affect this government and the next government, and the government thereafter, and if we make stupid mistakes now then we carry it forever just like Labour did with the 105 LAVs, which we now know only 11 have ever been deployed. We now know the vast majority are sitting in Trentham waiting for a buyer - who would buy them?"

He said there were organisational issues inside the Defence Force and it was time that the top was "picked off" and the organisation examined.