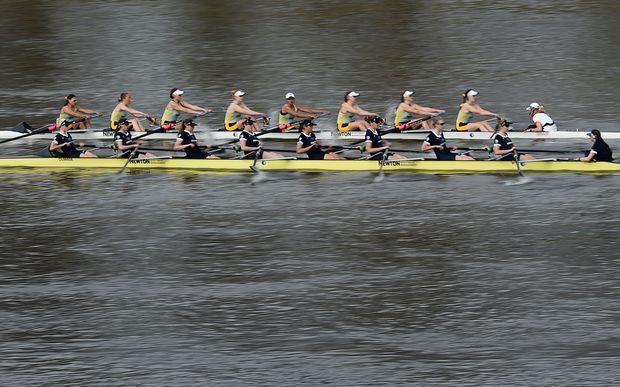 Oxford and Cambridge compete in the 2015 Women's Reserve Boat Race on the River Thames. Photo: AFP

Sam and James O'Connor were rowing for the Oxford men's eight, who won by six lengths to triumph for the sixth time in eight years.

The younger brother James, who grew up in Christchurch, told Radio New Zealand's Sunday Morning programme that being able to compete was a special moment.

"Coming from a place like New Zealand, where a lot of European-introduced traditions are relatively new, I'm kind of in awe of the scale of the thing.

"I've known about the boat race for a long time, but you can't really get a true sense for it until you're here and can experience it."

For the first time since its introduction in 1927, the women's race was held on the same day and on the same 7,000m stretch of water as the men and Oxford marked the breakthrough moment with a processional victory.

That set the tone for the later action when Oxford's men won the 161st men's race by six lengths to triumph for the sixth time in eight years.

In sunny conditions and with huge crowds lining the river from Putney Bridge to Chiswick Bridge, Oxford's women moved a boat's length clear after a minute and powered away.

Oxford's crew had to be rescued from the choppy tidal waters of the Thames during a training session in the week after getting into trouble, but neither boat suffered any alarms.

"It's a really special moment, something I've been working towards for three years," Oxford team member and president Anastasia Chitty said.

"It's even more special because so many women (have) not had this opportunity so it's really humbling."

The women's race has been held since 1927 further up river at Henley on a straight 2,000m course, but after years of campaigning for equal billing they were finally given equality with the men this year.

Oxford's men, despite being the lighter crew, took longer to establish their superiority, but once they attacked halfway through the race Cambridge had no answer.

The winning margin was 19 seconds.